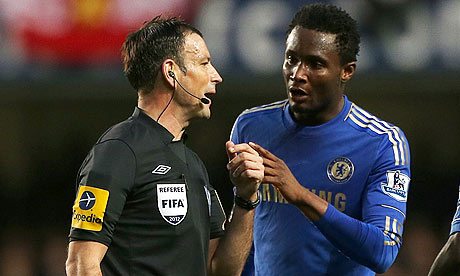 We learnt Mikel Obi accused Clattenburg of casting a racial slur and abusive words against him on Oct 28, 2012.

British Football Association said referee Clattenburg has been cleared by the police of any wrong doing.

Here is an official statement from Chelsea:

Chelsea’s John Obi Mikel has been charged by The FA for an alleged breach of FA Rule E3 in relation to his side’s game against Manchester United on 28 October 2012.

It is alleged that in or around the Match Officials’ changing room at the end of the fixture, Mikel used threatening and/or abusive and/or insulting words and/or behaviour.

The player has until Friday 30 November 2012 to respond to the charge.