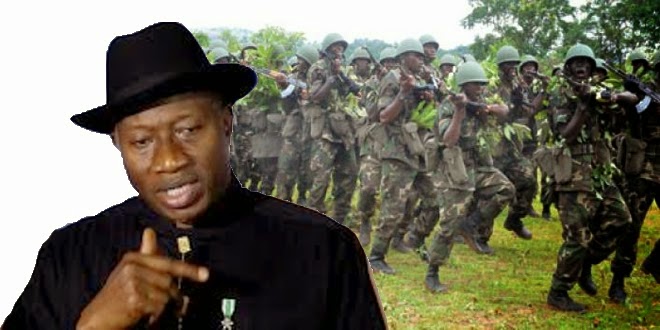 The Nigerian government has reportedly outsourced the war against Boko Haram. The Chadians were first hired in million dollar deals and next mercenaries were chartered from South Africa to the dismay and frank anger of the South African authorities. [The Nation of 31st January]

It can be safely concluded at this point that the Goodluck Jonathan-led government despises Nigerian youth.

While several millions of youth are unemployed with some of the largest numbers unemployed in the affected northeast, the Jonathan government could not see it useful to take advantage of our own who better know the terrain and enemy and have already been engaged and dying as “Civilian-JTF” fighting Boko Haram and defending our communities, but rather sees it best to invest billions of Naira to charter foreign soldiers and mercenaries in hope of squashing Boko Haram before the election.

This is one more of the greatest shames to the Nigerian people. Apart from once again triggering a row with South Africa, who were obviously pissed that Nigeria was chartering mercenaries, Nigeria has embarrassed itself globally as a nation that relies on everything from technology to human resource by import.

Nigeria’s Chief of defense, Air Chief Alex Badeh lied to the nation in September of last year that they will indeed assimilate and convert the Civilian-JTF patriots into a “professional fighting force” to combat Boko Haram [Thisday, 20th Sept. 2014]. But this was obviously a gimmick as the boys allowed only dane guns and machetes were continuously sacrificed and sent in the front line of the “scared military” to fight the wars with Boko Haram, yet denied training and arms as promised. And when time came for Nigeria to invest in its defense, mercenaries from South Africa and Chad were hired with billions of naira and our boys and our army were left cold.

Apart from not understanding the complexity of crime and terror and how these are increased by social disadvantages, and policies such as these, the Jonathan government is simply wicked, tactless and unpatriotic.

So many of us begged for the right to bear arms to go fight Boko Haram and die while at it if such was our destiny [ENDS 26th April, 2014]. So many of us have been engaged in the war already; fighting and dying in Borno, Yobe and Adamawa. So many of us across the nation are unemployed and will want to be engaged at a cost a fraction of the amount paid to charter these foreign mercenaries; heck we even have Mujahid down south who promises he is ready to give an equal reaction for every action of Boko Haram. We have a southern pastor who has signed up and says he is anointed to lead the war against Boko Haram and rip out the necks of the terrorists.

Why is Nigeria not consulted in matters pertaining to our survival and territorial integrity? Why are Nigerians not employed and engaged in matters of State security? Why is this government messing with our sovereignty? Who made these decisions? Was it made by Patience?

For how long shall Nigeria lay waste to its own?
[About the Author: Dr Perry Brimah, ENDs.ng]

I Will Vote For GEJ Because Of Tribalism, Not Good Governance By Okafor Johnmary
2015 Nigerian Presidential Elections Debate: From The Minds Of Curious Citizens By Ekekere