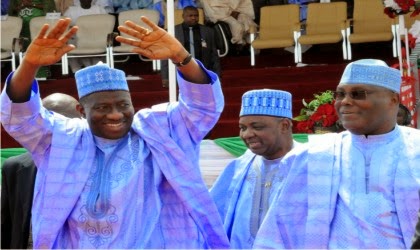 Ex-VP and Presidential aspirant of the All Progressives Congress, APC, Atiku Abubakar, has revealed that President Goodluck Jonathan has begged him to return to the Peoples Democratic Party, PDP.

He confirmed that President Jonathan paid him a secret visit on Friday night to hold a meeting that lasted till the early hours of Saturday.

Sources at the Presidency told SaharaReporters that Mr. Jonathan went to Mr. Atiku’s home with the aim of persuading him to lead a so-called interim government of national unity that the president has been covertly attempting to sell to numerous political figures in recent weeks. 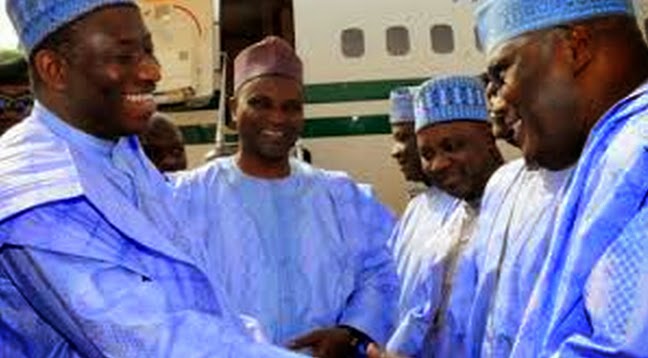 One source said Mr. Jonathan and some hawkish members of his inner circle, including Petroleum Minister Diezani Alison-Madueke, First Lady Patience Jonathan, Governors Olusegun Mimiko and Ayo Fayose of Ondo and Ekiti respectively, as well as senior presidential aide Doyin Okupe, have decided that handing over power to Muhammadu Buhari “is out of the question.”

When SaharaReporters reached Mr. Atiku, he expressed surprise that the online news portal knew about his meeting with President Jonathan.

Mr. Atiku said he had retired to bed when he was woken up and told that President Jonathan had come to see him, adding that the president was already waiting in his living room.

After denying that he was asked to head an interim government, Atiku admitted that Mr. Jonathan tried to prevail on him to rejoin PDP.

He disclosed that he rejected the invitation outright.

According to Mr. Atiku, the president also discussed the ongoing war against Boko Haram insurgents, asking for support for Nigerian troops fighting in the area.

He said they also discussed the possibility of displaced Nigerians returning to the areas that have been recaptured from Boko Haram.

Asked whether he thought President Jonathan was interested in allowing elections to hold on 28 March, Atiku hesitated before stating that he would not wish to speculate, but he said the president’s body language did not reveal that he was interested in the polls that are scheduled to hold in two weeks.

The secret meeting between Mr. Jonathan and former VP Atiku has caused unease among some APC stalwarts. A few hours after the meeting, a faction of Mr. Atiku’s original political organization, the Peoples Democratic Movement (PDM), announced their endorsement of President Jonathan.

In his telephone interview with SaharaReporters, Mr. Atiku disclosed that he was opposed to the formation of an interim government.

He stated that when former military dictator, Ibrahim Babangida, set up an interim national government in 1993, the dictator offered him a position in the government through the late General Shehu Yar’Adua (ret.).

He said he rejected the position, adding that it was eventually given to a Lagos politician Dapo Sarumi.

Asked further about the substance of his conversation with Mr. Jonathan, the former vice president said he advised the president to ensure that the elections were free and fair and devoid of the bloodshed that trailed the 2011 general elections.

Continue Reading
You may also like...
Related Topics:Atiku, jonathan, Meeting