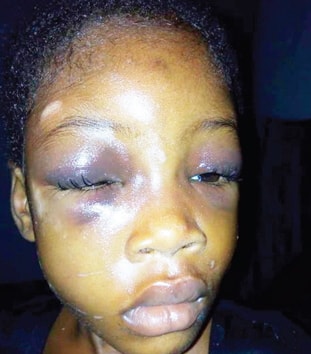 Sick Girl Assaulted By Couple In Kaduna For Defecating On Bed

Kaduna Police command operatives have arrested a woman, identified simply as Rahmatu and her husband, for allegedly brutalising and almost blinding a five-year-old girl.

The couple was arrested yesterday after news of the assault on the five-year-old, who is staying with them at Angwan Dosa, a suburb of Kaduna metropolis in Kaduna North Local Government Area filtered out. It was learnt that the girl had defecated on her bed following complains of running stomach.

The development had angered Rahmatu who descended on the girl, which led to physical injuries, mainly on her face.

However, luck ran out on the suspect, when a neighbour, who got wind of the incident, alerted members of a Non-Governmental Organisation (NGO), Umukhail Foundation, who rushed to the house to rescue the girl and drew the attention of the state Ministry of Women Affairs and Social Development (MWASD).

Confirming the incident, the Commissioner, MWASD, Hajiya Hafsat Baba, said the girl had been treated at Barau Dikko Specialist Hospital, Kaduna and now in safe custody pending the time her father would come from Maiduguri, Borno State where the little girl hails from.

“When we got the report from an NGO this morning (yesterday), fortunately there are some security personnel on ground, who went to the house and arrested the lady and her husband.

“Her husband was arrested because he watched his wife did that to the girl. If found guilty, he would become an accomplice, punishable under the new Child Welfare and Protection Law of Kaduna State.

“Immediately they brought the girl, I took her to Barau Dikko Specialist Hospital here in Kaduna for medical examination and treatment because she may be having internal injuries. “She has been treated and examined and she is now in safe custody pending the time her father will come from Maiduguri.

“Presently, the woman, who did that to her, is in police custody at Kawo together with her husband. We hope the girl will get justice because the woman will be charged to court after investigation. “This will serve as deterrent to others and remind the people that, the child protection law in Kaduna State is in force and implementation has commenced.”