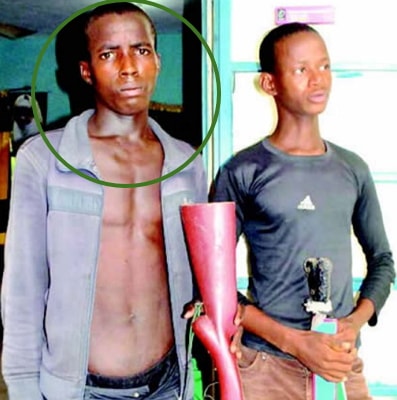 The robbers, 19-year-old Juli Umar, Adamu Amudu,and Aliyu Isah, were arrested by the police operatives attached to the Wushishi division.

They were said to have attacked and inflicted injuries on one Samaila Usman of Fulani Camp for refusing to surrender the money he made from sales of his cows.

It was learnt that Umar masterminded the attack on his former boss who had paid him off with a cow as agreed after working for six months.

We gathered that Umar connived with other bandits to attack Usman and knocked off two of his teeth during the robbery.

Checks revealed that the hoodlums attacked their victim with cutlasses, single barrel gun and robbed him of N87,000, two sets of wrapper and a Tecno handset.

Blaming an evil spirit for his alleged misdeed, Umar said, “I shouldn’t have done what I did after all he did for me, Allah will punish me severely. My master did not in any way offended me and as such did not deserve this kind of treatment from his servant.”

“I have made the biggest mistake in my life, I am even sorry to have deceived Amudu into participating in this heinous crime that has ruined our lives,” Umar added.

The Police Public Relations Officer, Muhammad Abubakar, told our reportersthat the operatives recovered from the suspects one single-barreled gun and two cutlasses.

He said Umar confessed to have conspired with Amudu and Isah to attack the victim.