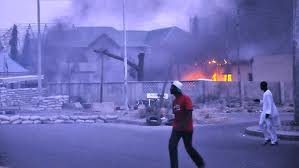 The Kano Joint Security Task Force said this afternoon that they arrested four members of Boko Haram during a gun duel in the early hours of the morning in the sleepy community of Tinshama, Hotoro, Kano, northwest Nigeria. naijagists.com

The spokesman of the Security Task Force in the commercial city, Lieutenant Ikedichi Onyenonachi Iweha told reporters that his men arrested four members of the Islamic sect who had dared security forces, “but there is no casualty on our side.”

However, a reliable security source confirmed that a policeman was injured during the gun battle that lasted for over one hour, adding that, “he is quickly responding to treatment in a Kano hospital.”

Today’s confrontation came two weeks after a similar raid on the hideout of members of the Islamic fundamentalists at Mariri area of Kano during which a large cache of arms and ammunition were recovered and unspecified number of Boko Haram members arrested.

Six explosions and several gunshots that resounded at Tinshama this morning created fresh fear and apprehension in the city, which had witnessed relative calm in the last two weeks.

Residents were sighted at several locations of Kano today discussing the latest development.

Members of Boko Haram on 20 January carried out a series of coordinated attacks and bombings that left over 186 people dead and government properties destroyed.

“We were woken up with about six heavy sounds of explosion followed by gunshots that lasted for about 1 hour, 30 minutes. No one knows in particular but from all indications, we believe that it was between members of Boko Haram and security agencies.

“The sound of the explosions and gunshots was so scary that we had to run away from our homes this morning for fear of the unknown. As I am speaking to you now, I may not go back home today, because for one, there is heavy security presence around the area,” said a Tinshama resident.

A security account also stated that men of the Joint Task Force had earlier surrounded the area following a tip off that Boko Haram members have their hideout at Tinshama.