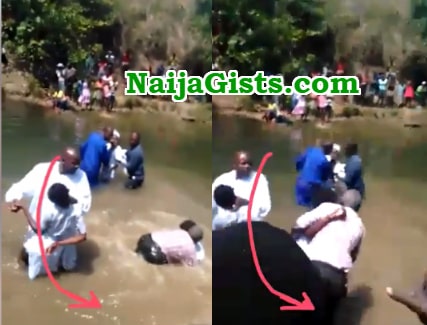 Video: Lady Beat Up Pastor During Water Baptism Exercise For Attempting To Drown Her

According to a Facebook user based in Jamaica, a mild drama happened during a water baptism exercise conducted by a church recently when a lady who became angry after she was held for a long time under water attacked the pastor baptizing her.

The incident which was captured on camera showed a church official being dragged into the river by a lady he was baptising.

The shocking incident left other church members in shock as they tried to comprehend the reason for her outburst.

See the way the other ministers in the video handle the ladies.

Come to think of it, what kind of Pastor will hold someone for this long under water during baptism???. You wan kill am…