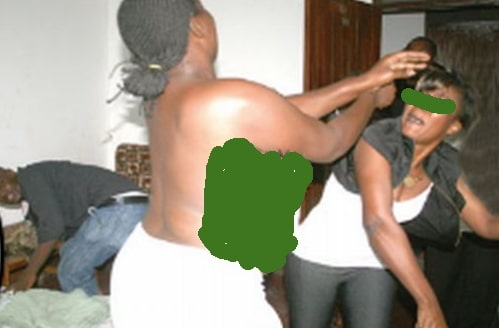 A woman identified as  Mrs. Deborah, who attacked a widow, Mrs. Jennifer, for sleeping with her husband got what she did not bargain for when the widow told her that she was not ready to leave her husband because she also needed sex like her as her own husband was late.

The incident happened last Sunday at Omiyale Road at a popular joint in Ejigbo, Lagos, while Deborah resides in Olele Street in the same area.

It was gathered that Jennifer’s husband died in an auto crash after they had three children when she was around 34 years. She relocated to Lagos where she then met Deborah and her husband, Mr. Mike, and they became family friends.

At a time, Deborah became suspicious of Jennifer and her husband and then started withdrawing from the relationship as a family friend but her husband got deeper into it.

It was confirmed that Jennifer was actually sleeping with Mr. Mike until Deborah got to know, started making trouble and attacked her severally before the incident.

She told Deborah that she will not marry her husband because she will like to remain in her late husband’s family to take care of their children but she will sustain the relationship with her husband until death do them apart. Mr. Mike was present but did not say anything and Deborah was forced to leave the place in tears.

She was blamed by the people around for coming to the joint to behave in such manner in public but her husband did not say anything.

When P.M. Express correspondent visited the joint, Jennifer confirmed that Deborah came to the place, shouted in order to embarrass her in the public.

She retorted that she was still alive, had feelings like every other woman but will not go about chasing men whereas Mr. Mike was available and mature to understand her feelings.

Continue Reading
You may also like...
Related Topics:husband, snatch, widow

Talking To Parents About Sex: How To Tell Your Dad Or Mom You Are Sexually Active
Bible Stops Bullets During Robbery Attack On White Farmers In South Africa