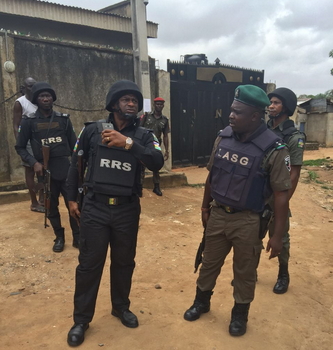 July  27, 2016 – Lagos Policeman Shot By Militants In Igando Lagos In Coma, Read Eyewitness Account Of What Led To The Attack

More details have emerged on the attack carried out by some Niger Delta militants who invaded Akesan community in Igando yesterday.

Witnesses said the gunmen, numbering about eight, all dressed in white shirts and trousers. They invaded Akesan about 8a.m. and hired four motorcyclists popularly called Okada riders to take them to the creek in the community.

But other gunmen, who were already inside a speedboat, came down and ordered the motorcyclist to enter their boat.

However, some residents near the river saw what transpired between them and the motorcyclist and raised the alarm which attracted the Oodua People’s Congress (OPC) members in the community.

The OPC members later confronted the gunmen. One of the OPC members, Mr. Semiu Adedeji, said he and another member, Oluwo, were at Ewedogbon bus stop in the morning when they saw the gunwielding militants alight from a commercial bus.

According to him, they were eight and dressed in white clothes. He said: “Immediately they came down, they called some motorcycle riders to take them to the creek where one of their leaders built a house.

When they got there, they refused to pay the riders. One of the motorcyclists, who wanted his money at all costs, threw a stone at them. But they ordered him to enter their speedboat.”

Adedeji added that when the gunmen noticed that some residents who lived close to the river saw what they were doing, they brought out their guns and started chasing them to the main road.

He said: “When they chased some of the residents to the bus stop, unfortunately some policemen from Igando Division who were on patrol of the area ran into the militants. The militants opened fire on the policemen.”

Adedeji said that when the gunmen had the upper hand, the policemen fled and abandoned their operational vehicle. He added: “Immediately the gunmen pounced on the police vehicle and vandalised it.

From where Oluwo and I sat, we came out and faced them with the assistance of one policeman who stood his ground and replied them fire for fire. “When we observed that we couldn’t overpower them, some of the policemen who ran away called for reinforcement.

Officials of the Special Anti-Robbery Squad (SARS), OPMESA and some officials of the Rapid Response Squad (RRS) and Metro Patrol police were deployed there.

The gunmen later escaped through the creek.” Policemen, who stormed the area, according to other witnesses, later demolished the house of the leader of the militants. The police, it was learnt, also recovered a speedboat engine, a gas cylinder, a generator, some machetes and a wooden cross from the building.

The police also deployed a drone to trace the gunmen. It was also learnt that the gunmen had kidnapped a mother of two on Monday but set her free yesterday. When our correspondent got to Akesan yesterday, some residents were moving out of the community in droves for fear of reprisal. A resident, Mrs. Idowu Gabriel, said the people were afraid. 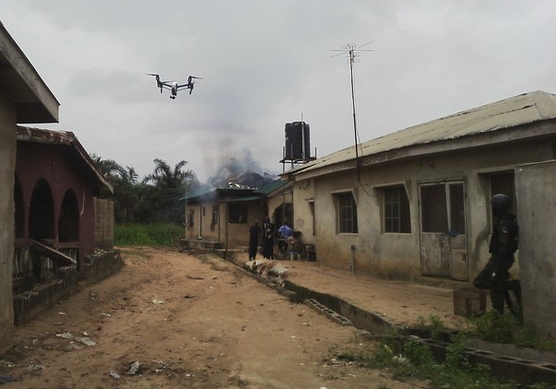 She said: “We cannot sleep because we don’t know if the militants would come back to attack us. That is why some residents are moving out. Even those of us who are not relocating will not be able to sleep with our eyes closed.” Another resident, who identified himself simply as John, said some of the people living in the coastal area were tired of the militants.

He said: “Our women cannot go to market anymore. We cannot take boats from our village at Agelete to other coastal communities. They are always on the sea robbing people of their money and goods. Even some women are being raped by these people.

These militants are going out of hands.