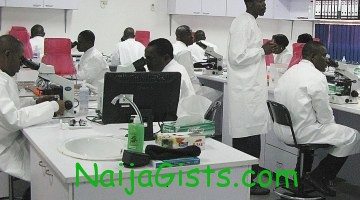 Scientists carrying out series of test

The Chief Medical Director of Irrua Specialist Hospital in Edo State, Prof. George Akpede, has said 22 people have died of Lassa fever  in the hospital since last year.

Akpede spoke in an interview with the News Agency of Nigeria (NAN) in Irrua, said the deaths were recorded between last January and this month.

He said the victims were admitted at the hospital over the period.

Akpede said the worst cases were recorded between October and February, when 12 patients died.

He said although cases associated with the disease were on the decline in the state, it was worrisome that medical personnel handling the cases were being infected.

“Mortality is decreasing. It is much lower than what we have been experiencing in the past year and a possible explanation for that is the increase in the level of awareness.

“Unlike previous experiences, people who have contracted the diseases now report for treatment earlier instead of treating common fever.

“Having a dedicated staff is also reducing the rate of mortality. Since last year, it is only now that it is possible for us to offer a level of critical assistance to patients by way of dialysis,” he said.

He advocated a sustained campaign to raise the level of awareness.

“Here, in this hospital, we are beginning to see overwhelming number of victims of the disease. We have had patients from Taraba, Abakiliki, Ondo, Kogi and even Abuja.”