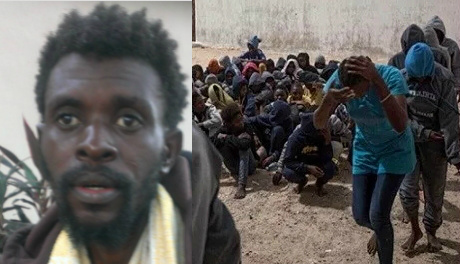 More Nigerians rescued from Libya haven’t stopped narrating their ordeal in the hands of their slave masters in Libya.

Here is what some of the returnees told The Nation:

One of the returnees, Eluor said:

“I was doing car wash (Lawaji) to earn cash to pay for my freedom. After I paid the money, they pushed me and others out. I later came to Tripoli again for jobs to save money to go to Italy but they caught me and I was put in detention.”

John Anita is from Orhionmwon Local Government Area of Edo State. He chose to go to Italy after the death of his father.

“I didn’t want to suffer after my father died. It was painful bearing his loss because the vacuum was too big to fill. I became desperate for a quick alternative to survive.

Without feeling remorseful, Ziko Ekpeye, 30, from Bayelsa simply said: “I found my way to make life better. I have spent two years looking for money to be able to take care of my three kids.”

Mother luck was not just on the side of Tina Peters. The Benin, Edo State-born Tina said: “Everything was hard, that is why I came here. I was able to cross the desert to Sabha and Tripoli. But, I was caught on top of the sea. It was painful because I planned the trip to take care of my only brother and three younger ones. I have lost my parents and I wanted to help my family.”

Ojiase Kevin, 30, who was an artisan in Nigeria, also ran out of luck on the sea.

He said: “I can make good furniture like those ones they used to bring from Europe but I had no patronage. I wanted to go to Europe to go and learn more. I have spent two years in Libya. I spent six months in Tripoli and one year and four months in Siburata (Sabratha).

I was not lucky to go Italy. I crossed over to the sea on October 1, 2016 but they caught me on top of the boat. I made another attempt and crossed the sea again on October 1, 2017 but the engine spoilt.

“I was on the sea near Tunis when the engine spoilt. I spent one hour to enter No Man’s Land but I nearly almost died. It was God who rescued me. We were 142 loaded in the boat which later broke down.”

Asked of the next move, he said: “I can never come to Libya again, I don’t know Libya and I don’t want to know Libya. They have killed two of my friends. They were shot while escaping. They arrested me and put me in prison, I spent three months without daylight. Libyans are very wicked and desperate. The Bible says the heart of man is desperately wicked. They hate blacks and treat blacks like animals. They used to arrest blacks and sell them into slavery because of money.”

Moses Testimony, born in 1985 in Edo State said: “I was sold into slavery in Libya by one Madam Joy who I can identify. I gave her N300, 000 but when I got to Sabha, I discovered that she didn’t pay the agent.

The agent kidnapped me after serious beating. The Libyan asked me to pay N400, 000 for freedom. The person that rescued me in Sabha was Ben who is an Ishan. It was my sister and mother that raised N400, 000 to secure my freedom.

“I did not come to stay in Libya. From Benin, I was traveling to Italy. I am just happy to be back.”

Blessing Sunday from Oredo Local Government Area of Edo State looked younger than his age. Sunday, who was born on September 15, 1992 said: “I fell into this trap because I was looking for money to raise my family. We are ten in number. We have lost our dad and we were left with only our mum to take care of the family. The responsibility was much; I couldn’t finish my secondary education. I haven’t stayed up to a year in Libya. Actually, I was arrested on arrival and put in detention centres between March 2016 and last year in Tajoura camp.”

Drawing much sympathy was Carol Wisdom, who put to bed at Tajoura Detention Centre in Tripoli on December 27, 2017. She was impregnated by a fellow migrant, simply called Wisdom, who has managed to cross by sea to Italy. She said: “I am a stylist from Auchi (Etsako West). I came to hustle, I dey go Italy but I could not make it. I stayed in Siburata (Sabratha). I have spent one year and four months in Libya. I was impregnated by Wisdom who don cross to Italy. I decided to name my baby Testimony because of the hassles I went through. God just gave me a second chance to live.”

As for Maryam M. Musa from Paiko in Niger State, she admitted, she was a product of bitter divorce. Close to tears, she said: “My parents divorced in 2003 because my mother had twins. I came to Libya in the last eight months to work as a housemaid. I came on my own.”

Pressed further, she added: “I was staying Ganapoli but luck ran against me one day when I went out to buy biscuits. I was caught and thrown into detention centre in Tajoura.”

When her name was missing from the list of the first batch, she rolled on the floor and said: “Tell President Buhari to help me, I don’t want to stay in Libyan detention centre anymore; I have seen many people dying, it is a hell coming to Libya.”

Steven Okwudiba Junior said he regretted coming to Libya despite the fact that he has spent one year in the Arab territory.

He said: “My destination was Europe. I didn’t get to the sea. I was working in Siburata (Sabratha) to save for my trip to Europe but I was arrested when I was going to work.

“I have since then had unpleasant experience in the hands of Libyans. They are horrible set of human beings. This is a city where everyone understands the language of the guns. Their money is easy to pick up and easy to burn.”

Continue Reading
You may also like...
Related Topics:libyan, wicked

Popular Nollywood Actress Married To A Yahoo Boy, Internet Scammer Wanted In The US Heartbroken
Iceberg Slim Set To Propose To Juliet Ibrahim