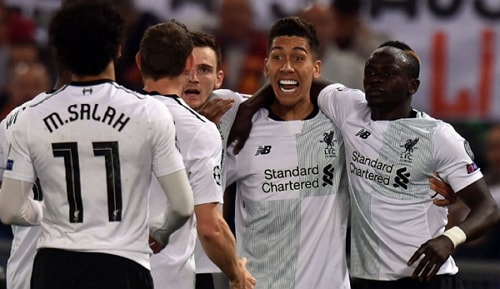 Liverpool will play Real Madrid in the Champions League final after Jurgen Klopp’s side secured a 7-6 aggregate semi-final win over Roma on Wednesday night.

Goals from Sadio Mane and Georginio Wijnaldum were enough for Liverpool to go through to their first Champions League final in more than a decade despite the Reds suffering a 4-2 loss at the Stadio Olimpico.
Klopp’s men will now meet 12-time winners Real – who have won the last two finals – in Kyiv on 26 May.

Liverpool came into their semi-final second-leg clash against Roma with much confidence after securing a 5-2 win over Roma at Anfield in the first leg last week.

Despite letting in two late goals in that game, Liverpool knew that the chances of Roma doing what they did to Barcelona in the last round and scoring three goals at home without a reply were slim.

And, indeed, it proved true as Klopp’s men left the Stadio Olimpico in silence after they opened the scoring in just the ninth minute following an error from Radja Nainggolan.

The Belgian gave the ball straight to Roberto Firmino in midfield, with the Brazilian driving forward and teeing up Mane who, unlike in the first leg, didn’t miss his chance and coolly fired past Alisson Becker.
It was the crucial away goal Liverpool had been looking for and the visitors continued to keep their cool despite conceding an unfortunate own goal just six minutes later.

Stephan El Shaarawy, who was a big threat for Roma down the left flank, sent in a cross that Dejan Lovren kicked straight onto Milner’s face – which then rebounded past Loris Karius into the back of the net.

Continue Reading
You may also like...
Related Topics:Liverpool, real madrid