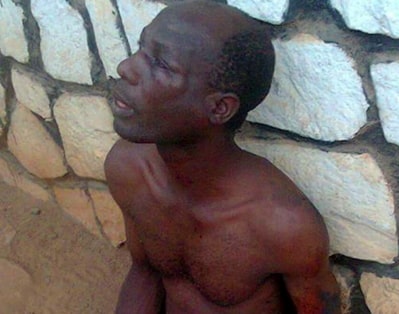 Police in Ondo state yesterday said it had arrested a lunatic popularly called ‘At All At All’ in Tekunle Village, Ondo East LGA of Ondo for stabbing 2 people to death in the Adeyemi area of the state.

The lunatic allegedly killed a police inspector and a 75-year-old man identified as Oyadele Olusegun.

At least 4 other people were injured in the attack carried out on Saturday.

A source in Tekunle village told Punch NG that the lunatic first attacked the old man who was drying cocoa beans in front of his house, after which he killed one of the policemen that came to arrest him.

“We don’t know why the mad man attacked and killed the old man. When the matter was reported at the police station, a team of policemen was sent to the area to arrest the lunatic.

“As the policemen arrived at the scene, the mad man also attacked and killed one of them with his machete. He injured four other people before running into a bush.”

The source said attempts by the policemen to arrest the lunatic were not successful.

“Each time the policemen wanted to arrest him, he disappeared and reappeared like it was a prank. He finally disappeared into the bush and escaped arrest,” the source added.

The state Police Public Relations Officer, Mr Femi Joseph, said the lunatic was eventually arrested after a team of policemen, led by the Commissioner of Police, Mr Gbenga Adeyanju, chased him into the bush on Sunday.

He said, “We have arrested him. The CP led a team of policemen, some hunters and vigilance group members to arrest him in Tekunle village. He is in our custody.”