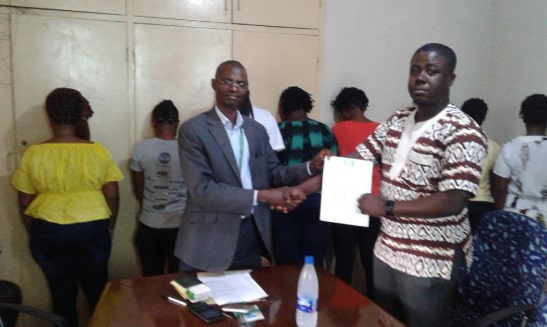 MMIA Airport NIS officials have arrested 4 Ghanaians for attempted human trafficking two weeks after 8 from the same country were earlier nabbed at the same airport for the same offence.

The four Ghanaians who were nabbed on Friday were between the ages of 22 and 25 years and were on their way to Europe for prostitution before they were stopped after interrogation by the officials of the service.

Just like the previous eight, the latest four had entered Nigeria through road from Togo and Benin Republic, while they also planned to travel out of Nigeria through Egypt Air before they were apprehended by the immigration officials at the airport.

Two out of the four culprits were identified as; Asare Mary, 24 and Ameyaa Naomi, 23.

The four who were with Ghanaian international passports in their statements, confessed to the crime, saying that they had attempted to use Nigeria as a transit point to connect Europe via Egypt Air.

The ladies, on further interrogation attributed the hardship in Ghana to their decision to try the illegal business just as they declared that their sponsors who they declined to name bought them air tickets.

Continue Reading
You may also like...
Related Topics:ghanaian, human, traffickers