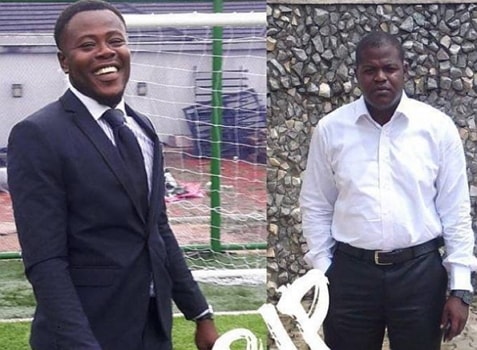 Nnamaka Nwani, a middle-aged man said to be a patient of a psychiatric home in Uselu, Edo, State, threw Asaba into a state of disarray, on Sunday, after slaughtering his two younger brothers, kingsley and Nwanyor.

Their widowed mother, a Permanent Secretary in the Delta civil service, had just returned from Canada, where her daughter lives, two weeks ago, after a medical check-up, when the incident occurred.

Shedding light on the tragedy on Facebook, Okiwelu Chukwudi, a friend of the deceased, alleged that the suspect thought his brothers were trying to gang up against him. .
He wrote: ”Both of you were in the church yesterday for your mother’s Thanksgiving. Little did you know it was your last days on earth. Little did your mom knew she will see both of you no more.
Rest in peace Kingsley and Nwayor Nwani. Eternal rest grant unto them oh Lord and let your perpetual light shine upon them. They were stabbed by their eldest brother after a heated argument between Nnamaka and Nwanyor. .

It was in the process that Kingsley was called. When he arrived, Nnamaka (Aniemeka) felt they came to gang up against him. He immediately took a cutlass and cut Kingsley on the hand and neck. Before using a dagger to stab Nwanyor on his stomach.”

Aiye Cult Member, Yahoo Boy Who Attempted To Kill Mother For Yahoo Plus Money Ritual In Lagos Arrested
Robbers Invited From Kaduna To Rob In Edo State Confess As Police Arrest Them In Hotel