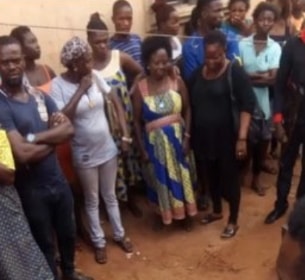 A man is clinging to life at the University of Benin Teaching Hospital after generator exhaust killed his entire family at his family home in Egor LGA of Edo state this morning.

According to family sources, Mr Tochukwu Okwueze’s wife and five children were found dead by neighbours on Tuesday.

The incident happened at Akpata Street in Egor local government area of the state.

Neighbours found the victims’ bodies when they broke into their apartment on Tuesday morning.

The family reportedly put on their generator and kept it in the kitchen throughout the night.

The man was taken to a private hospital after he was rescued while bodies of the dead victims were taken to the Central Hospital morgue.

A family friend, who identified himself as Vincent, said:

“My younger one called me from Lagos and asked me what was happening. I said that I did not know. So, he told me to go the house that something not pleasing to the ears has just happened.

“So, I call her (deceased woman) line. Somebody picked the call and said that they (victims) slept and did not wake up. I stay at Evbuotubu area, so I went to the place.

“The whole family was affected. But the police told me that the man survived it. They said though his case was serious, if there was the need to rush him to University of Benin Teaching Hospital, they would call me. It is a family of seven. The youngest is a set of twins.”