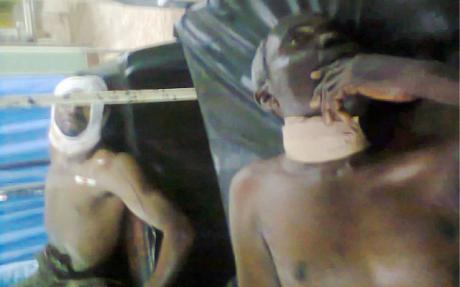 Just 24 hours after the Eid-El-kabir celebration, a middle age man whose name is yet to be known engaged in an indiscriminate slaughtering of human beings in the form of a ram leaving two persons dead and other Four in a critical condition at the Saint Gerard Catholic Hospital in Kaduna.

The incident took place at the popular Kano Road by Adejah Street at about 4pm yesterday as people were going about their normal activities still in the euphoria of the Sallah celebration when the said man appeared from no where and slaughtered two persons and inflicted severe injuries on four others before he was over-powered.

According to him, “We have arrested the man, and he is cooling his heels in our custody. But we cannot ascertain whether he is a mad man or not. So far we have recovered some exhibits, and our men have swung into action as investigation is ongoing.

I can also confirm that a 4-year old girl was killed by the man. Our men have taken over the scene of the incident to avoid break down of law and order”.

One of the victims, 12 year old Rabiu Yusuf Musa, narrated his ordeal to Leadership Sunday at the Saint Gerard Catholic Hospital where he was receiving treatment. He said, “I started running when I saw people running, but before I knew what was happening I saw a deep cut on my hand and part of my head from a knife a man was holding. I became unconscious and was rushed to the hospital here by some people who I don’t know.”

Another elderly man, Alhaji Yusuf Falalu, 53, who was also a victim of the act said, “I was walking around Kano Road, near the Central Market, when suddenly I saw a man putting knife to my neck and drew it heavily, and blood started flowing down my body.

I was confused; I did not know what to do. He continued to draw the knife against my neck, with more blood flowing down my body.

I saw the man, but he rushed to hide himself behind a parked vehicle shortly after I became unconscious, he was all alone, and he continued to attack anybody he saw. He was carrying two sharp knives in his hand. He is not a small boy; he is of the middle age bracket.”

Explaining further, Falalu said, “As he was struggling to cut more people in the neck, people started running in different directions. But some people gathered courage and pursued him. They followed him across the major road, that is, Ahmadu Bello Way. How they ended with him, I don’t know again because I was in the pool of my blood.”

Another eyewitness, Ashimu Yusuf, who rushed to the scene of the incident, told our correspondent that, “I saw my father in the pool of his blood with serious blood gushing out of his neck. There are other five people that were attacked. A man entered the Central Market by Kano (Credit:Leadership)