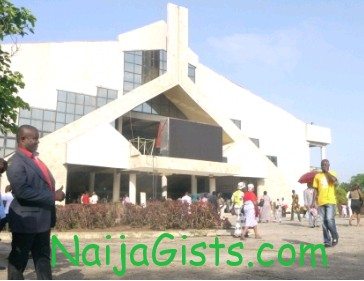 What might have led to another tragic suicide bombing has been averted at Living Faith Church (Winners Chapel) in Yelwa, Bauchi State after soldiers who took proactive measures arrested a fleeing suicide bomber. naijagists.com

On the 3rd of June 2012, a suicide bomber who rammed his car into a church killed over 20 people while 45 others sustained severe injuries.

This incident took place @ about 11am in the morning during the church service.

We learnt 2 suspected suicide bombers on a motorcycle who disguised as church members escaped security checks.

However, they ran out of luck as they plan to change their entry route, a plan which prompted suspicious security officers to run after them.

An eyewitness said the suicide bombers were compelled to change their direction since the Joint Military Task Force had alerted Church security men to placed iron barrier in order to prevent suicide bombers from gaining access to their church premises, a development which made the bomber to abandon his motor bike and take to his heels for safety.

One of the suicide bombers was caught.
In his confession, he said top religious leader in the state sent them to carry out the attack.

He promised to release more information as investigation continues