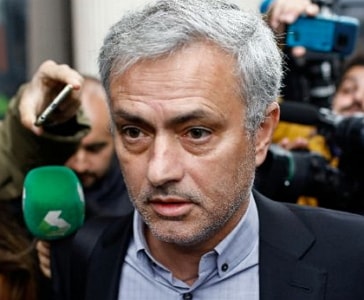 According to the Telegraph, Manchester United manager, Jose Mourinho has escaped being jailed by accepting a one-year suspended term after he was found guilty of tax invasion by the Spanish authorities .

He was accused of hiding about €3.3million (£2.9m) of earnings in tax free countries while he was in-charge of Real Madrid FC.

The United manager has been saved by the Spanish law which allows a two years term to be served in probation for those who are found wanting for the first time.

The former Chelsea boss has now been fined the sum of €1.9m (£1.78m), having been established that companies in Ireland, the British Virgin Islands and New Zealand were used to commit the fraud.

Meanwhile, the Office of the Prosecutor and the State Lawyers are expected to “communicate in the next few days… that they have already closed a compliance agreement” with Mourinho over the tax evasion charge corresponding to the years 2011 and 2012.

It would be recalled that in November 2017, Mourinho claimed that the case has been closed, adding that he had already paid and signed with the state.

This will come as a relief to the self-proclaimed Special One who is currently battling to win the heart of the club’s management and fans over the unsatisfactory result of the team so far.

Mourinho has had the worst home defeat of his career against Tottenham where he watched his side being trashed 3-0.