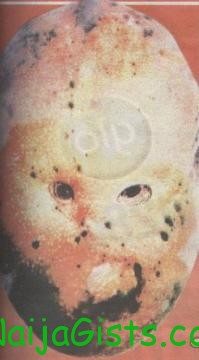 Mango with human head and eyes

While Christians consider this as a sign of the end time, a priest claims it’s a message from the gods asking him to perform rituals.

Several others were very shocked at the sight of the fruit and asked that the tree that bore the fruit be cut down.

An agriculturist had a simple explanation, but not many were unprepared to listen to him.

The issue that had set the Lolobi-Kumasi village in the Hohoe District of the Volta Region abuzz last week was a mango fruit that appeared to have some human features.

How Mango With Human Head & Eyes Was Discovered In Ghana

This shocking discovery was made by a 15 year old woman named Mercy Appiah as she went on her regular early morning task of gathering mangoes a the village outskirts.

Mercy told the crowd that had gathered upon hearing about her mysterious harvest that she had gathered enough fruits for her consumption and was about to leave the scene when she heard the thud of a mango falling to the ground.

“I ran to pick it as it looked bigger than all the other fruits I had on the day. It was at that point that I realised that it had the features of a human head,” Mercy said.

Mercy said she rushed home with the fruit so she could show it to her mother, who asked her to throw the fruit away, but not after her mother had told her a story regarding the particular tree from which she picked the mango.

When the fetish priest was contacted by The Finder for his comments, he said he once used the place where the mango tree was currently situated as his shrine where he performed many sacrifices.

“Even though I planted the tree for the purposes of fresh air, the appearance of this fruit is a call on me by the gods to come and perform some sacrifices in the area,” the priest said.

When he was asked about what he intended to do with the mango, the priest said he was going to ask the gods for direction on the matter.

But some of the folks of Lolobi Kumasi who had gathered to get a first-hand look at the mango expressed shock at what they had seen, with some asking for the “guilty’ tree be cut down immediately. 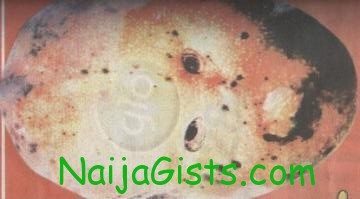 Some Christian residents went biblical. One said, “This is just a warning to all of us that the end is near.”
But others, who said they were also Christians, said they believed it was just another creative work of God.

“God is capable of everything,” one resident said.

An agricultural extension officer, Mr Samuel Yawson, however told The Finder the human eye looking features that were found on the mango may occur as a result of the activities of fruit-eating worms, resulting in the fruit’s deformity.

Beauty Queen Born A Man, Jenna Talackova
My Boyfriend Doesn’t Know I Have Kids – Should I Tell Him?