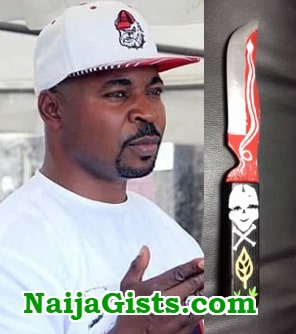 Oluomo Was Stabbed With Makanje Voodoo Knife, They Shouldn’t Have Rushed Him To The Hospital

An anonymous APC politician has claimed that NURTW boss MC Oluomo who was attacked on Wednesday may die if a poisonous venom in his body is not extracted.

The source said a voodoo knife popularly called Makan Eje aka Makanje (Do Not Touch Blood) was used in stabbing him by those who his spiritual power secrets.

Here is what the source said yesterday:

“MC Oluomo wasn’t supposed to be rushed to the hospital after being stabbed, because he supposedly wears a spiritual armour that shields him from gun, knife and other dangerous weapons.

“The knife used to stab him was a poisoned one. He was expected to be inured from the venom of a poisoned knife. Because Oluomo was ‘unkillable’, the only way they could break through his skin was to poison the knife and as I speak with you now, native and medical doctors are battling to keep him alive by extracting the venom from his body.”

Even though police boss Imohimi said he is still recovering at the Eko Hospital, insiders said Oluomo was taken out of the hospital to a secret location late last night in order to save his life.