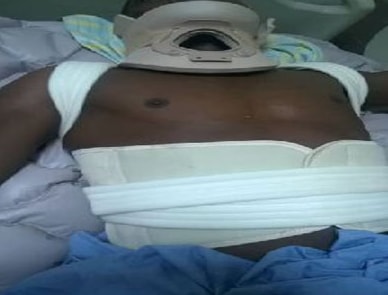 When most Nigerians were rejoicing over President Muhammadu Buhari’s decision to honour the late Chief Moshood Abiola, winner of the June 12, 1993 presidential election, on June 12 2018,  Michael Olushola Adeniran, was at his mechanic workshop trying to eke out a living. A truck which he was working on was jacked up and he squatted under it oblivious of the impending danger.

As he was working at his workshop in Agege, Lagos, the truck suddenly shifted on its jack and fell on him. He was only luck to have escaped alive after people nearby and his colleagues lifted the truck off him.

Today he is lying critically injured at the Lagos State University Teaching Hospital, (LASUTH) Ikeja. According to experts, he would need N1.2million to be able to be able to walk again. This would cater for surgery, wheel chair, blood, drips, drugs and other needs.

He is appealing to kind-hearted citizens to please come to his aid. All donations can be directed to his account with details below:

Thanks for your help.