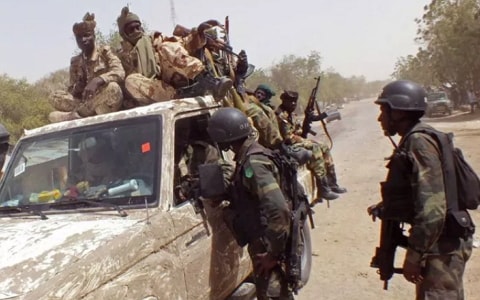 Five officers, 18 soldiers and 8 trucks were allegedly missing after the attack which occurred early on Saturday.

The military, acting on intelligence, mobilised troops in a convoy of 11 trucks, to clear the insurgents from the deserted village. The attacking insurgents were believed to have been those who escaped the ongoing offensive by the military to flush out Boko Haram in the fringes of Sambisa and the Lake Chad region.

A competent military source told the NAN on Sunday that the insurgents, in their hundreds, allegedly ambushed the troops and, in the process, many of them were missing. He disclosed that only three, of the 11 trucks deployed to the area, returned to their base in Maiduguri, after suffering huge loss in the battle with the insurgents.

“There was quick response by the army when they received reports that hundreds of the insurgents gathered at Boboshe on Maiduguri-Konduga-Bama road. The gallant soldiers were ambushed by the insurgents, only three of the 11 trucks returned to the base. It is not clear what happened but it was assumed the soldiers were missing following the ambush,” the source added.

Meanwhile, residents of Jilli community in Gubio Local Government Area of Borno State, on Saturday, fled the town; sequel to an attack by Boko Haram insurgents.

It was learnt that the insurgent attacked the area from the axis of Lake Chad, forcing the residents to flee.

Mallam Bukar Mustapha, one of the residents, told NAN that he and other villagers fled their homes when they received report that the insurgents were coming to attack them.

“In the afternoon on Saturday, we heard that the insurgents gathered in the nearby bush preparing for the attack. I am one of those who ran to Maiduguri, which is about 45 kilometres from my village. On Sunday morning, I called Gubio and I was told that the insurgents had attacked the town during the night. I do not have the casualties because the situation is still not clear at Jilli,” Mustapha said.

Another resident, who declined to be named, said troops had been deployed to the area.

Continue Reading
You may also like...
Related Topics:missing, nigerian, Soldiers