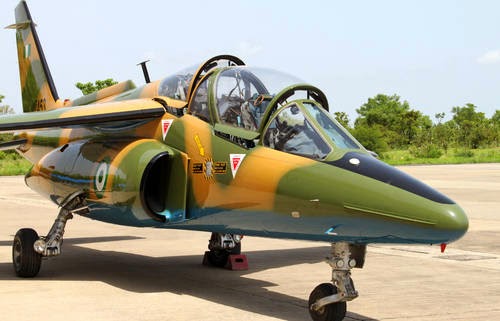 Sept 14, 2014 – Missing Nigerian Air Force Fighter Jet Missing With 2 On Board In Adamawa

A fighter jet , NAF 466 belonging to the Nigerian Air Force has reportedly crashed over Adamawa state several hours after launching an airstrike against the dreaded Islamists, Boko Haram.

According to the Defence Headquarters, the fighter jet (NAF466) with two pilots on board went missing two days ago and all effort to locate it has proved abortive.

“Since then, all efforts to establish contact with the aircraft have not yielded any positive result,” the statement said.

According to Military sources, the missing Alpha jet is among the aircraft deployed to carry out intense aerial bombardment of Boko Haram terrorists.

But as the military bombed their locations from above, the terrorists also began to plot against the aircraft carrying out the operation.

The military on Saturday said some of the equipment recovered from the terrorists during an operation in Konduga were three Hilux and one Buffalo vehicles with mounted anti-aircraft guns.

A top security said the missing plane might have been shot down by Boko Haram.