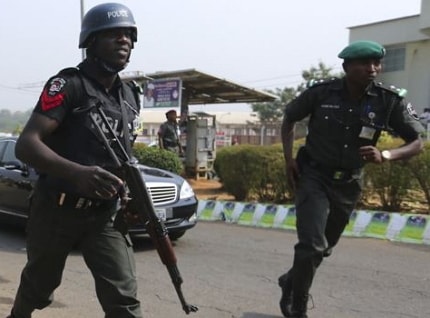 A trigger happy mobile policeman who shot and killed his fellow Joint Task Force, JTF member during a disagreement in Delta state is yet to be found.

The incident happened at shell oil firm in Odimodi area of Burutu LGA of the state on Saturday around noon.

According to eyewitnesses, the two men in uniform guarding the facility were heard arguing and the next thing people heard were gunshots.

On getting to the scene of the murder, they found the lifeless body of the soldier on the floor .

The suspect later fired shots into the air to scare people away before stealing his victim’s gun and ran away.

The fleeing mobile policeman is yet to be arrested as at the time of this report.

Fulani Herdsmen Kill Kogi Monarch, Wife & 7 Others After Burning Palace In Omala LGA Of The State
Nigerian Man Dies Of Heart Attack In Finland While Speaking With Wife On Phone..RIP Biose Marley