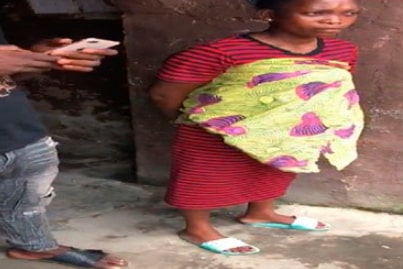 A woman has been arrested for allegedly battering her son out of frustration.

The accused identified as Mrs Celestine reportedly beat her son, Tochukwu until blood gushed out of his head.

The attack took place at 18 Irolu Street in Ijeshatedo area of Surulere.

Here is what her landlord’s daughter said about the suspect:

“The latest incident occurred on Tuesday morning. I was sleeping when neighbours informed me that she had started beating up her son again. I asked what the matter was and they said because the boy refused to eat ‘fufu’.

“I refused to intervene because I had reported her to the police and even to her pastor. The police told me to leave her alone; that they would caution her.

“When she learnt that I had reported her to her pastor, she attacked me and accused me of denting her image.

“Since then, I stayed away from her and her family. That was why I refused to intervene on Tuesday.

“But I cannot continue to keep quiet. I left my home in Iwaya, Yaba, Lagos last August for my father’s house because of an issue involving the murder of a child. I don’t want anything like that to happen in my father’s house.

“How can someone beat up a child mercilessly because he refused to eat fufu?

“There was a day she beat up one of her children. Blood gushed out of his ear. I reported at the station and the police told me to leave her alone, saying they would warn her.

“During the Ramadan fast, she repeated the act. She beat up her child from 12am to 3am. No one could sleep. I reported the incident to the church near our house that they should counsel her. Consequently, she became annoyed with me.”