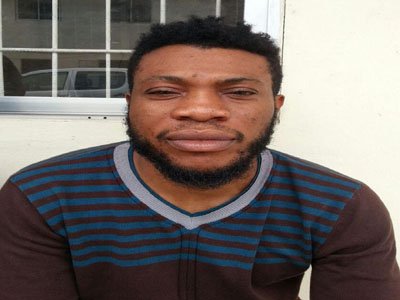 Ajaero was arrested at the Murtala Muhammed International Airport (MMIA) Lagos during the inward screening of passengers on a Qatar Airline flight.

The suspect, who hails from Abia State, Umar said, excreted 44 wraps of substances that tested positive for cocaine weighing 85 grammes.

The suspect in a statement released by NDLEA blamed his arrest on operational mistake on the part of his business partner.

He said: “I am a fashion designer by profession. I went to Brazil two years ago in search of better working conditions. This is my first time of trafficking in drugs and I got involved through friends.

“I was expecting 30,000 Euros as my profit. My business partner was to collect the drug from me while on transit in Qatar but he failed to show-up. I was compelled to come to Nigeria with the drugs but I excreted 30 on board the aircraft.”

NDLEA Chairman/Chief Executive, Ahmadu Giade said that the Agency will continue to pay attention to passengers coming from Brazil, saying “Brazil is a source country for cocaine and we shall continue to beam our searchlight on this route. Those who seek to enrich themselves through drug trafficking shall be arrested and prosecuted”.

Giade called on members of the public to assist the Agency in reporting suspected cases of drug trafficking, production and abuse for necessary action.

The NDLEA boss added that it is risky to shield drug traffickers because their activities undermine public safety.

Continue Reading
You may also like...
Related Topics:mmia, ndlea, tailor