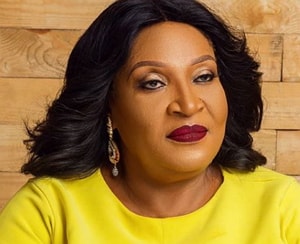 Nigerian actress Ngowi Nwosu in this interview with Lanre Odukoya talks about her role in animation movie, Sade and other issues pertaining to the Nollywood movie industry.

You have kept faith in the industry even after over two decades as a thoroughbred thespian; why have you decided again to identify with Sade, Nigeria’s animation film for Hollywood standard?

Like I’ve said before and I’d continue to say ‘Sade’ is a project you must identify with whether you like it or not. Any project that you’re into and after reading it you still can’t get the feel, then it’s not worth being a part of. From the outset, when I got the script and read it, I was smiling all through. That was to tell me that I was up for another amazing adventure. It’s a witty movie with a lot of substance. There’s so much embodied in Sade as it sends a unique message.

You played ‘Ene’ in the movie; could you reveal a little about that character?

She’s the lady who had a goldmine and didn’t know how to use it until someone else took it over and the thing became a household name. The stone that the builders rejected became the chief cornerstone.

You began your career when pundits appreciated stage plays more; do you still crave those moments onstage?

I’m an actor and I never say never. It can only be over when the last breath is drawn.

Do you still have the energy to utilise the stage?

You can try me and you’d be amazed.

What are the things you’re most grateful for through the years?

I’m most grateful to God for health. The fact that I’m standing today is to the glory and honour of God.

The younger actors seem to glamorise everything and earn most of the mouth-watering deals; how does that make your generation feel despite all you put into the industry?

In life, everything is about time. When it’s your time, yours will come. You don’t live on other people’s time. Don’t begrudge anyone who is on top because when it’s your turn, you’d definitely be there. That’s just it. That they’re having endorsement deals here and there doesn’t mean I’ve not had my fair share. I had and I’m still having anyway.

Would you also return to producing your movies?

I had produced movies. I stopped for some time but I will return to it.

I co-produced Evil Passion, Stainless and I was the producer of ‘Onga’ on radio for three years.

Has been an actor cost you anything dear?

It is true our world has its ups and downs, just like every other business because if you are into any business, it is not every day that you make progress. There are some businesses you go for that you lose, this happens in our own world too. It is not different, but I know that, so far, I will say thanks to the Lord. He’s the reason for how far I have gone in this world and I have come to the realisation that there is really nothing to this life. And through my profession, I have been able to understand life better; through my profession I have been able to see life in different perspectives, because sometimes things that you think do not exist actually do.

Though acting is make-believe, some of them are real stories happening in peoples’ lives. So, it has broadened my horizon. But the only bad part I would say fame has cost me is that, you are no longer able to be who you ought to be. I mean that you are not yourself all the time because sometimes you have to mind where you step in, what you do; for instance I like eating roasted plantain, roasted corn and pear along the road, but you have to be conscious of that.

But even at that, I don’t really give a hoot, most of the things we do, we do with caution, because we are supposed to be a role models to a lot of people out there. Another part of it is negative publicity. The negative publicity in our world is becoming very alarming and nauseating and it is not good. It is as if we are the ones that sin the most; but for crying out loud, why are they on the artistes’ neck all the time?

Emeka Okoro: I Was A Womaniser Until I Gave My Life To Christ After I Got Married
Regina Chukwu: School Dropout Turns Nollywood Superstar