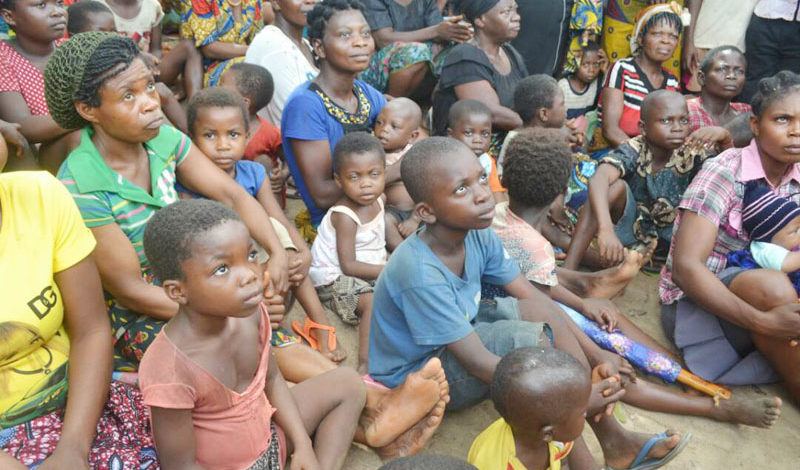 Today, the National Commission for Refugees, Migrants and Internally Displaced Persons in Ikom distributed food and materials worth millions of Naira to Cameroonian refugees residing in Ikom Local Government Area of Cross River.

Mrs Sadiya Umar-Farouq, the Federal Commissioner of the Refugee Commission said
during the distribution of the items that the gesture was in line with Federal Government’s agenda of providing succour to asylum seekers in Nigeria.

Umar-Farouq, who was represented by an official of the commission, Mr Immosan Immosan, said refugees were scattered in Obanliku, Etung, Boki, Ikom and Obudu local government areas of the state.

She added that “the attention of Federal Government was drawn to the symbolic declaration of sovereign state and independence of Ambazonia by Anglophone Cameroonians through the hoisting of flags and national anthem in strategic locations in Cameroon on Oct. 1.

“This action culminated in repressive attacks by government security agents on armless civilians, destruction of property and arbitrary arrest and detention of mass population.

“The consequences of such attack has been the remarkable influx of Cameroonians into the bordering towns of Ikom, Obudu, Boki, Etung and Obudu in Cross River, Gembu in Taraba and other surrounding locations.”

She assured them that Federal Government would continue to play its role by providing security and succour to refugees while efforts were ongoing to foster peace in their country.

Mr Eric Shu, the Director of Rhema Care, the implementing agency for the UN High Commission for
Refugees in Nigeria, told the News Agency of Nigeria (NAN) that the commission registered more than 6,000 Cameroonian refugees from Sept. 22 to date.

He said “our objective is to work and collaborate with the refugee commission in rehabilitating and registering the refugees that are flowing in from Cameroon.

“From Sept. 22 that they started arriving in Nigeria, we registered well over 6,000 Cameroonians. Our main duty here is to ensure their welfare and security.”

Mr John Inaku, the Director-General of Cross River State Emergency Management Agency, advised the refugees to be law-abiding, adding that the state government would continue to provide shelter and security for them.

Responding on behalf of the refugees, Mr Mark Pongo, thanked Federal Government for the food and other items and for the hospitality accorded them since their arrival.

In September, Cameroon deported 100,000 Nigerian refugees in the hope of stemming the spread of terrorist group Boko Haram despite pleas from the United Nations.