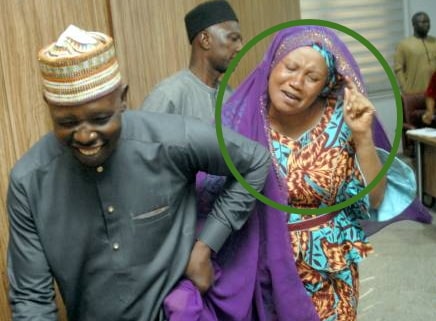 An audacious woman use the name and office of First Lady Aisha Buhari at the Aso Rock presidential villa to stage fraudulent acts, one of which may have yielded about N150 million is now in custody, the Department of State Security (DSS) disclosed on Monday.

Briefing reporters at the DSS headquarters in Abuja, its spokesman, Mr. Peter Nnochirionye Afunanya stated that investigation is continuing towards unraveling how the light complexioned middle-aged lady variously know as Amina Mohammed, Justina Oluoha and Amina Villa managed to beat the meticulous security protocols at the presidential villa and engage in her ‘business’ over an undetermined period.

However, the accused lady pointedly contradicted the DSS version of the story, yelling at the top of her voice that she was never a fraudster as she only arranged transactions in Federal Government real estate, with the assistance of top government officials who had been benefitting from such.

“They should ask the First Lady’s sisters, Mariatu is involved, Babachir Lawal knows about this; all the directors have been collecting bribes

“I can never be a fraudster, I only deal in selling real estate that the Federal Government was disposing. SSS has been keeping me in this office for four months,” she screamed before being returned to another part of the DSS headquarters.

However, DSS spokesman, Mr. Afunanya who dismissed her claims of being detained for four months stated that she had been reporting at the DSS office since November 22 last year when her ‘ unauthoorized acess to the presidential villa and used the name and office of the First Lady to engage in a fraudulent act’ was discovered.

“The woman who will soon be paraded before you used false aliases, false identities to defraud unsuspecting members before she was discovered; Amina Mohammed, also known as Justina Oluoha, Amina Villa, had, on 22nd of November 2017, paraded herself as the First Lady of Kogi State.

“She used the false identity to evade protocol and scrutiny, thus gaining unauthorized access into the villa and particularly the residence of the First Lady and wife of the President, Hajia Aisha Buhari; she took advantage of the fact that personalities such as First Ladies, ministers and certain categories of officials are not taken through rigorous protocol and security checks at the villa (security) post.

“What will even surprise you is that Amina whose phone number is registered with the name Amina Villa had, on the said date, invited one Dr Alexander Chika Okafor also known as Chikason, into the villa wherein she made him to believe that the invitation was at the instance of the First Lady; investigation has revealed that the First Lady was away on lesser hajj and not in the villa during the period.

“Dr Okafor had complained that he was fleeced of over N150 million with respect of a Federal Court of Appeal property in Lagos which Amina had promised to help him buy through the First Lady; the property was said to have been one of those under the Presidential Implementation Committee On Lease Of Federal Government Properties.

“Investigation has shown that this unholy enterprise is not to the knowledge of the First Lady; what Amina simply did was to use the First Lady’s name and office as base to lure and defraud her victims.

“Members of the public are therefore advised to be wary of individuals or groups who drop names and offices of high government officials to defraud them,” he stated.