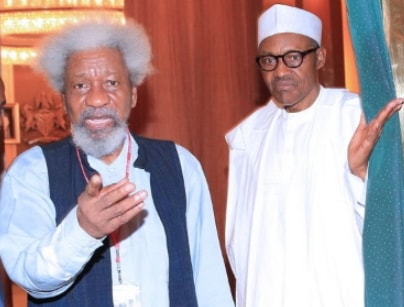 Professor Wole Soyinka has called on the Nigerian president Muhammadu Buhari to seek help if the situation of the nation is too much for him to handle.

According the Nobel Laureate, the nation is dying and the time for false pride is over. The English professor thinks that if the nation lacks the technical resources to tackle the many issues facing the nation, the only solution us for the president to seek help.

This is coming in the wake of the many tragic situations the nation has been faced with in recent times, most especially thectrahic death of many innocent citizens in the hands of violent Fulani herdsmen in Plateau state.

The nation was also thrown into a state of despair yesterday after an avoidable tanker accident killed nine people and about 54 vehicles were destroyed in Lagos.

Continue Reading
You may also like...
Related Topics:Buhari, wole soyinka