In this recent interview with Wole Adepoju, the actress revealed her abroad-based boyfriend has moved back to Nigeria in order to start a family.

Nigerian actress Bimbo Thomas who said she is currently in a committed relationship is planning to get married very soon.

She also spoke at length on her weight loss battle and how are parents are urging her to get married soon. 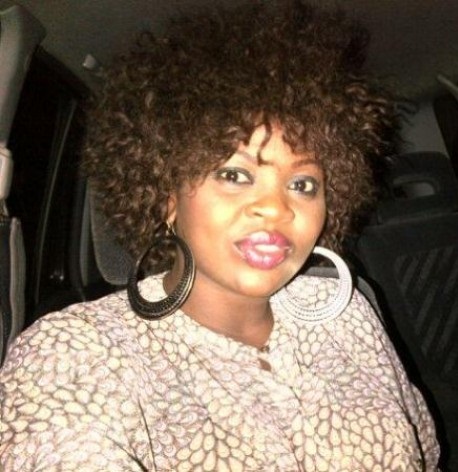 What is happening to Bimbo Thomas, where have you been?

I have been working. I’m going to have a break soon because I’m going to the United States to shoot a film. I should be away for about six weeks.

I thought it’s going to be a pleasure trip?

It’s going to be work and pleasure. It’s been about three months since I got back from the United States and it’s been work, work and work so I will be finding time for holiday in between. It’s going to be a mix of pleasure and work.

Some actresses shoot movies just to exhibit their cleavages and curves without any message. What should we expect from your own movie?

It’s different strokes for different folks. I am a theatre practitioner to the core, I read Theatre Arts, I know all the nooks and crannies of it, so I’m not going to do just anything and that is why I took my time and if I’m doing something now, it has to be something reasonable and meaningful. The movie is going to be a tragedy and it’s going to be society related. You should keep your fingers crossed.

Many feel you have not been able to detach yourself from the character you played in Omo Ghetto, that you have not interpreted other roles well enough. What can you say about this?

I don’t know why people keep saying this. I have said it that for an artiste to interpret a particular role very well does not mean he cannot handle others in the same manner. I’m an artiste; I’m supposed to be versatile. Omo Ghetto was a success, we thank God but I just did what I was asked to do, it was like an everyday thing, I did not know it was going to be what it was. I have done several other roles; I have acted a wife, doctor, and girly roles that are not in line with violence and such. Although, I hope to be better because we are learning everyday but to the best of my knowledge, I feel I have done better roles, roles that knocked out Omo Ghetto, its just that people happen to love it and I think its still hard for people to detach Bimbo from her role in Omo Ghetto. But I hope that with time they will get out of being stuck to Bimbo in Omo Ghetto.

A few of you girls that made waves through Omo Ghetto still walk in the shadow of the producer, Funke Akindele. Why is this so?

(Laughs) I have said it and I will say it again, Funke has always been my friend, even before Omo Ghetto. People have right to their opinion because if you are not close to us you can’t really say what is going on between us, you just can’t judge a book by its cover. I do whatever I like to do. I take whatever decision I like to take. I’m an adult and nobody is a boss to anybody. I met her in the industry but we happen to like each other and we became friends. We can only advice and suggest to each other like ‘Bimbo, why don’t you do it this way?’ and I can equally say ‘Funke, why don’t you try it like this?’ but she cannot impose, not in any way. I don’t know why people talk like that, we are friends and we are cool. I do whatever I like to do, she does not stop me and she can’t even stop me. Like I said, I don’t know why they say that but nobody is bossy over the other.

Let me take you down the memory lane. What actually attracted you to acting?

I had always loved entertainment even before I went to school but I never knew I was going to find myself in acting. Actually, I put in for Mass Communication but unfortunately my cut off mark was not enough so I had to do a change of course, which had to be either Yoruba, History or Creative Art. Creative sounded like something I could do and when I went through it, it was theater, music and visuals and I was like ‘okay, I love graphics, I know how to draw’. Music? Not my line, I don’t like it. Theater? Okay, lets see how it goes. In my first year it was a big task because we had to dance round the school, go to the theater and all that but I started developing interest before I rounded off my year one when I saw a lot of actors who were undergraduates like Femi Brainard and Tayo Odueke (Sindodo) who were in my class.

Tayo Odueke really helped me because most of the time in our class project when we were going to have a four-man cast, she used to cast me and because I knew I was doing it for marks, I used to put in my best. I remember one of such class projects we did was for Dr. Hammed Yerima and while I was performing on stage, I saw in the audience my lecturer, Yerima, giving me applause and I was surprised he did because he’s a critic. Later, Tayo said ‘Bimbo, you can do it’ and she started taking me around but because I did not want to be a freelance, I met with Abbey Lanre who invited me to join Odunfa Caucus where I trained. That was how I started my career.

Are you intentionally restricting yourself to the Yoruba movies?

Not at all, I have done several soap operas and TV series. I must also say here that I intend to shoot more series this year. I have certain projects I will be working on when I return from the United States.

What was the reaction of your parents when you decided to take acting as a profession?

I have the best mum ever and I’m kind of mummy’s girl because I’m closer to her than my dad. When I told my mum I wanted to act, what she said was that ‘you are shy, do you think you can make a career out of it?’ and I said ‘watch me now’, and she supported me.

What would you say get you attracted to your fans?

My fans will be in the best position to answer this but from observation, I think they are cool with how I deliver or interpret my roles.

How fulfilled are you?

I have not even gotten to anywhere close to where I wanted. I’m not close to it at all. I’m only working towards that height.

As a beautiful lady, how do you handle male attention?

I know how to handle guys; it’s not a problem. For instance, my blackberry is not meant for fans. I also watch my interaction with guys. You would see someone call you only to say he got your number somewhere. I don’t shun them because you can never tell. I handle them with care and I make sure I don’t misbehave.

You are ripe for marriage. What is keeping you?

You will ask God that question o. But it will happen. I won’t say I should have been married or whatever. I will get married. I would marry very soon.

Your parents are not bothering you?

Could it be that you are confused as regard whom to choose among those at your disposal?

No, the thing is I’m single but I’m not available.

Some ladies fancy their boobs; others fancy their hips and the rest. What do you appreciate most as your physical attributes?

I think it’s my face. I have got a pretty face. I love my face.

Some actresses love to marry guys that are based overseas and eventually they disengage. What is your take on such practice?

That is an individual thing, it’s about what you like. For me, I do my thing, whether you are abroad or Nigeria; I decide whom I go out with. When I conclude you are okay for me then I don’t have a problem with where you reside. My boyfriend is based abroad, yes, but he just relocated and we are together. I would say it’s an individual thing like I said earlier because we all have freedom to do whatever we like.

Marriages break every now and then in the industry. In your opinion, what do you think is the cause?

Marriages break everywhere but in the case of the movie industry, I think the man needs to love his wife real good to be able to cope because we spend many days on location and we are so dedicated to our job. Some men are also the cause of the break-up, they might ask you to quit the job because you are taking so much time on location, you are keeping some particular kind of friends, and newspapers have written this and that about you. Meanwhile, these are things he’s been living with before they got married and now he starts making all kinds of demands because he knows he has gotten you in his house. I think with better understanding of your spouse and less interference from third party, marriages will work.

What is the most embarrassing thing a fan has done to you?

One day, a commercial bus driver and his conductor saw me on Ikorodu Road and the driver just parked and started shouting ‘omo ghetto’ and before I knew it all the passengers had come down and were asking me to do this and that. I was so embarrassed, I wanted to flare up but because of the environment, I could not. It was really something else.

Are you actually trimming down because you look slimmer?

Yes, I’m really working on myself because I am imagining myself in size 12 (laughs).

How did your first kiss happen?

My first kiss ever, haaa… it was stolen and it was my first love. We were talking and I was angry, trying to report something to him, and he was like ‘don’t be angry’ and before I could say Jack Robinson, he had planted a kiss on me. And I was like ‘what did you just do?’ That was how I had my first kiss. In fact, my first kiss was stolen.

Tiwa Savage’s Emotional Tribute To Husband-To-Be “You Made Me Who I’m Today”
D’banj Is Tired Of Dating: I Told My Mum To Find Me A Wife