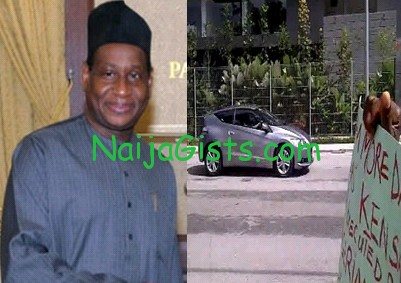 On the morning of November 10, 2012 when Mr. Josiah Nwilee left his residence in Malaysia for activities to commemorate the 17th anniversary of the judicial murder of the renowned writer and environmental activist Ken Saro-Wiwa and 8 other Ogoni men; little did he know he will end up in Police custody. The most absurd of his story is that his detention actually came from the person placed in a position and saddle with the authority to protect him and other Nigerians under his mission or at least in this case to listen to him and to accept a memorandum from him as usually done in that country. 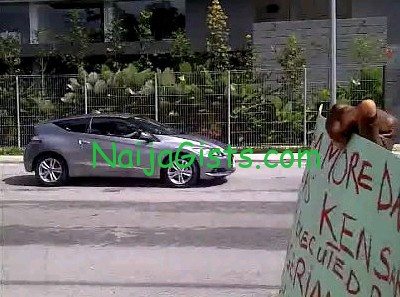 Mr. Nwilee arrived at the gate of the Nigeria High commission located at No. 85 Jalan Ampang Hilir, in the capital city of Kuala Lumpur, around 9:30 am local time. As part of the activities to mark the remembrance of the death of the Ogoni 9, the victim wanted to continue to remind the Nigerian Government about the condition of the Ogonis and Niger Delta people and to let the world know that the people are still in need after the killing of the prominent Ogoni sons. It may be recalled that the slain Ogoni leader – Saro-Wiwa had said as part of his last day messages: “You can kill the messenger but you can never kill the message”. Therefore, Nwilee went with that most powerful weapon left behind by their leader. The non-harmful weapon were simply the messages on the placards he carried. Some of them read: ………………..

The activist – Mr. Nwilee was at the embassy gate peacefully displaying his message in protest and then Amb. Bello Shehu Ringim decided to show him his mighty cruel power. In a way of trying to silence the protester, instead of delegating a representative of the mission formally to get the message from him in form of memorandum as the usual case in this country; he invited the Police to arrest him. The police arrived and having gone through the messages displayed by the protester, they approached him and try to oversee a process for the embassy authority to attend to Nwille but that mediation failed. The High Commission’s authority however, ordered that he should be taken away. As that was very strange for a peaceful protest of that nature in this country, the Police then demanded a written order from the embassy to be able to execute the arrest.

The embassy’s strategy and actions was nothing short of what the Nigerian Government did to to the Ogonis during the 1993 to 1995 genocide committed against this ethnic minority. When Sani Abacha and his regime did all they could including persecution, rape of the Ogoni women, murder and all sorts of crime against the people who were just peacefully demanding their rights. All were in attempt to silence the people. It is deeply regrettable that nearly two decades later and with modern civilization the Nigerian authority is yet to realize how responsible governments treat their citizens. Worse still, it is to the detriment of the image of the country that the authority headed by Amb. Ringim with his naivety and uncivilized manner that he ordered the detention instead of protecting or listened to his fellow citizen. Therefore, making him a victim under his authority.

While in Police custody so many cases of how the embassy’s negligence is making Nigerians suffer unfolded. First of all, it was shocking to discover the number of Nigerians in detention here. It may not be a new phenomenon that a disturbing number of Nigerian citizens are in lock ups in many oversea countries. However, the disbelief is the fact that testimonies from Nigerian detainees who have been locked for months reveal that our embassy officials never visited them and so no provision of consular services. Sad stories from those detainees beg for answers to certain questions. One of such questions would be “does the Nigeria High Commission in Malaysia actually know that protecting Nigerian citizens through consular services is a primary key aspect of their duties”?

A reasonable and unbiased authority that listens to its people and values even its minority vindicated me. In Malaysia once arrest is made in this country the local authority usually detain suspects for about 14 days while they carry out extensive investigation thereafter the case would be charged. So, that was the period I spent in detention that gave me the privilege of the bitter experience. The investigation was completed but the Nigeria High Commission could not convince the local authority of the crime that the activist committed through the simple and peaceful voicing out on behalf of his dear Ogoni people, confirming that I was illegally detained by Amb. Ringim. On the on Friday 23rd November, 2012 the IPO released the suspect and asked him to go that there is no case against him. This is just one of the many ways in which people who are incapable like the ambassador are bringing embarrassment and disgrace to Nigeria in the face of foreign authorities.

We challenge the Federal Ministry of Foreign Affairs to exonerate itself. The ministry should take the bold step to investigate the situation of Nigerians languishing due to denial of consular services which they are bound to benefit. We also urge all Nigerians both in Malaysia and at home to join in the call for Amb. Ringim to resign from his duty post because he continuously fail to deliver his primary duty of protecting Nigerian citizens. The Nigerian Government should emulate civilized nations that place top priority and value for the life of each and all of their citizens. Therefore, the government should be diligent on its responsibilities to the people by appointing people who have the interest of the nation and her people at heart. That is important because it is the only way a supposed diplomat like Ringim should have shown patriotism to his nation and efficient at delivering his official duties.(Article by Mosop Malaysa)