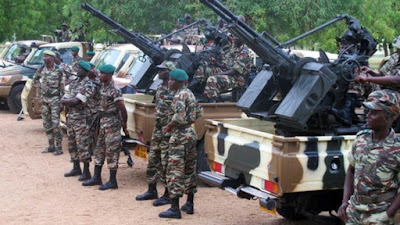 A joint operation of the Nigerian and Cameroonian army has neutralised 35 insurgents in the troubled North East.

The joint operation was carried out as part of clearance exercise of troops of Operation Lafiya Dole.

The troops, he said, hit the enclaves of Boko Haram at Kusha-Kucha, Surdewala, Alkanerik, Magdewerne and Mayen villages, all situated in the Nigerian – Cameroonian border.

Nwachukwu explained that the combined troops also tracked insurgents to Bokko, Daushe and Gava villages, where they unleashed another attack on the fleeing insurgents.

In the process, two of them were killed in the fire-fight and recovered one AK 47 rifle, a magazine, a trolley and some quantity petrol in Jerry cans.

The rescued persons, he said, were undergoing profiling, preparatory to their handover to appropriate officials of Internally Displaced Persons, IDP.