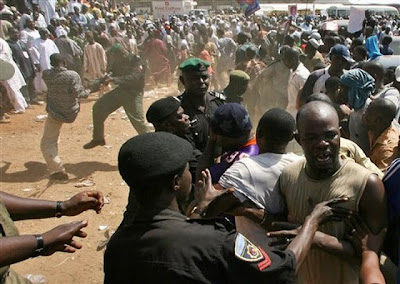 A suspected drug addict on Tuesday went berserk, stabbing six people. One of the victims, a 40-year old man, died from the injuries he sustained during the attack.

The incident happened in the Ringim Local Government Area of Jigawa. The News Agency of Nigeria (NAN) learnt that the incident which occurred in the Ausar Quarters of Ringim town also left five people injured.

The victim was identified as Magaji Ringim, as a staff of the School of Legal Studies in Ringim.

Bala Shehu, a resident of the area, told NAN the suspected killer, popularly known as “AKT”, had been well known as a thug in the area.

He said the thug had a quarrel with his mother but suddenly ran out and started stabbing people on the street.

“Most of the persons he stabbed with machete were seriously injured, while one of them died,” Shehu said.

Salisu Ringim, another resident, said the suspect had a misunderstanding with his mother over his indulgence in drug abuse.

The Jigawa Commandant of Nigeria Security and Civil Defence Corps (NSCDC), Muhammad Gidado, confirmed the incident when contacted by NAN.

He said the suspect’s arrest had been jointly effected by men of his command and those of the state police command.

“The suspect also injured some men, who are currently receiving treatment at the Aminu Kano Teaching Hospital in Kano,” the commandant said.