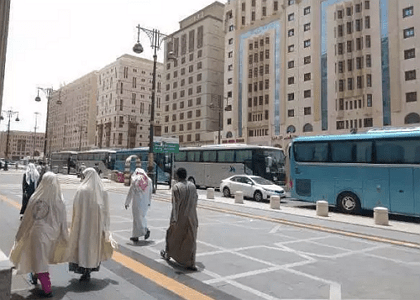 Madinah‘s hospitality industry has witnessed a boost, following the arrival of Nigerian pilgrims in the city for the 2019 Hajj.

Many Nigerian pilgrims were seen booking for lodging in some of the hotels located in the Al-Salam area of Madinah.

Several Nigerians lodged in some of the hotels such as Wefadah Alzalrah, Gulnar Alsalam and Diyar Alsalam.

Some of the pilgrims, especially women, were engaged in purchase of gift items and other basic needs.

The gift items, according to them, are meant for presentation to their families, friends and well-wishers upon return home from the pilgrimage.

Some Nigerian women were also seen selling Nigerian foods such as rice, beans, chicken and tuwo masara, among others.

An operator of a provision store, AbdulAziz Abdulmalik, in an interview, described the presence of Nigerian pilgrims in the city as a positive development.

Abdulmalik added that the Nigerian pilgrims are boosting commercial activities in Madinah.

“I have made some profits since the arrival of pilgrims in Madinah, especially those from Nigeria who check into my shop to buy one thing or the other,’’ he said.

Sources from the National Hajj Commission of Nigeria (NAHCON) indicate that no fewer than 15,629 pilgrims from Nigeria had so far arrived Madinah in 33 flights for this year’s Hajj.

Ahmed Magari, the Madinah Coordinator of NAHCON for 2019 Hajj, told journalists that the commission had contracted a Madinah-based transport company, Hafil, to transport about 35,000 Nigerian pilgrims from the city to Makkah for continuation of their Hajj rites.

In a show of hospitality to the pilgrims, some Arabs were seen giving them chilled bottled water and other packed foods.

Continue Reading
You may also like...
Related Topics:medinah, Nigerians