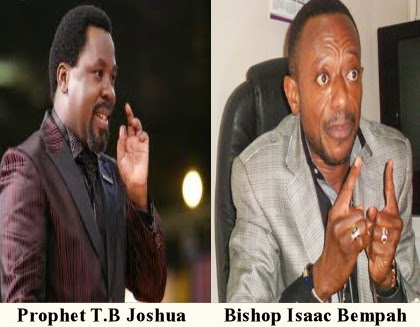 A very popular Pastor in Ghana has placed blame on Nigerian Prophet TB Joshua over the death of over 80 people in his church last week.

Recall that a building collapsed in his church on Friday the 12th of September 2014, killing 80 and trapping over 200 alive.

‘These are evil hands at work because I know people who have to make human sacrifices in order to be promoted in the spiritual realm…I know some people will vilify me for making this known.’ – Isaac Owusu said

The Pastor also accused TB Joshua of killing people when he came for a program in Ghana last year during a stampede that happened over his anointing water.

‘Look at what is happening to him. You came for a programme in Ghana and that led to the death of four people. You also woke up one day and a whole building collapsed, killing over forty people.’ – he concluded