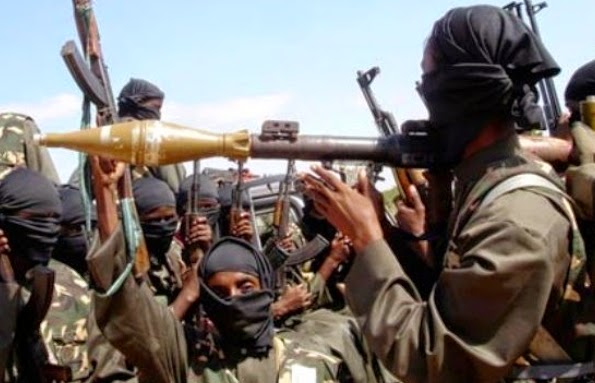 Some suspected Boko Haram militants yesterday killed many market women while searching for food to sustain their terror acts.

A top military source said the terrorists, who were look­ing for food raided Mainok market, about 56 kilome­tres from Maiduguri along Maiduguri-Damaturu high­way yesterday afternoon.

He said the insurgents carted away foodstuffs and money belonging to the traders after killing many people.

A Maiduguri resident, Al­loy Ikechukwu, who trav­elled along the Maiduguri-Damaturu road yesterday, told reporters the attack­ers stormed the market at about 1.30pm.

“I boarded a luxury bus from Lagos and as soon as we arrived Mainok at exact­ly 1.30pm, we heard heavy gunshots from the western part of the market and spo­radic gunshots followed. Hundreds of traders and residents fled the market in confusion, running to cross the highway to the other side while vehicles passing through the town were also making attempts to flee the town. It was such a confu­sion,” he disclosed.

He said many fleeing resi­dents were hit on the road by equally fleeing motorists in the midst of confusion that ensued, adding: “Many people may have died in the attack.”

“Many people may have been killed judging from the way the insurgents were shooting at the crowd,” he said. He also said he saw many of the fleeing residents who were hit by vehicles speeding off from the area, falling and bleeding. “Ve­hicles were hitting one an­other while the Boko Haram insurgents kept shooting,” he added.

A security personnel, who also travelled on the road yesterday, disclosed that the attackers first fired Rocket Propelled Grenade (RPG) into the middle of the mar­ket before they started firing gunshots into the midst of the traders. “The death toll may be high because there were many people in the market,” the personnel, who did not want to be named, said.

Boko Haram oppression  is becoming unbearable the FG must do something urgently.