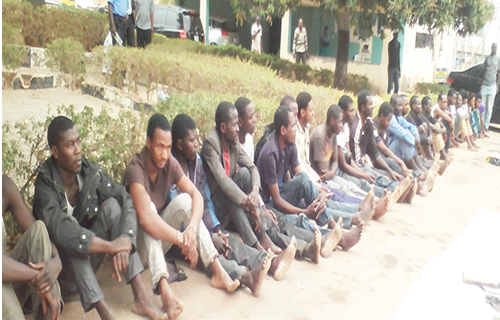 March 15, 2016 – Jealous Nigerian Soldier Stabbed Girlfriend To Death In Jos Plateau State After Finding Text Messages From Other Men On Her Phone

Sunday Umaru, a dismissed soldier has been arrested for allegedly stabbing his girlfriend, Miss Charity Thomas to death in Jos, Plateau state.

The suspect told police that he saw love text messages from other men on Miss Thomas’s phone.

He stabbed her in the stomach out of anger leading to her death.

Parading the suspect and other criminals before journalists in Jos, the state Police Commissioner, Adekunle Oladunjoye, said Umaru invited the victim from Kaduna to stay with him but killed her on the allegation that he saw several text messages from other men on her handset.

The suspect who served in the 3rd Armoured Division was attached to Sector 7 of Operation Save Haven Jos (OPSH) deployed to restore law and order before he was dismissed last year.