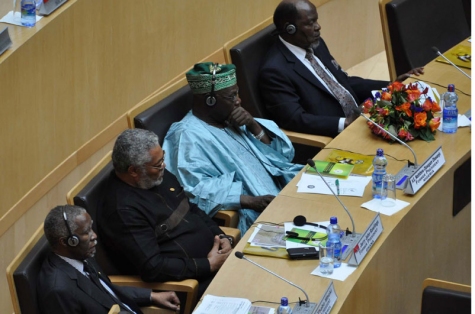 President Goodluck Jonathan on Saturday missed the opportunity to give a speech at the ongoing Special Assembly in Addis Ababa, Ethiopia to commemorate the 50th anniversary of the African Union (AU).

Two members of President Jonathan’s delegation spoke to SaharaReporters from Addis Ababa, the capital of Ethiopia which also serves as the secretariat of the AU. They reported that there was confusion among delegates as well as embarrassment on the part of Nigerian officials when Mr. Jonathan failed to show up in the hall to deliver his speech.

Mr. Jonathan’s “no-show” reportedly set tongues wagging as delegates from other African nations asked confused Nigerian officials why their president did not appear to address the AU on an occasion as important as this year’s assembly. The AU was inaugurated 50 years ago and known for many years as the Organization of African Unity (OAU). In the 1970s and 1980s, Nigeria was one of the organization’s most dynamic members, using international diplomacy as well as funds to push for the liberation of Mozambique, Namibia, Zimbabwe and South Africa.

Our sources offered conflicting accounts of Mr. Jonathan’s whereabouts. One Nigerian source said he heard that Mr. Jonathan had gone to the toilet when he was called. He added that a presidential insider later said Mr. Jonathan was having a bilateral meeting with a head of state from another African country.

But another source scoffed at both excuses. “If the president was in the toilet, his aides should have informed the protocol at the summit to delay in calling him to speak. And if the president wanted to hold a bilateral meeting, why should he fix it during the time he was told he would address the assembly??” He added that somebody within Mr. Jonathan’s inner circle disclosed that the Nigerian president had stayed up till late eating and drinking with members of his inner circle. Mr. Jonathan also reportedly spent a long time consulting with some of his governor associates back in Nigeria about ways to push back against the Nigerian Governors Forum that yesterday elected Rivers State Governor Chibuike Rotimi Amaechi as their chairman. Mr. Jonathan, who has had a long-running political feud with Governor Amaechi, had backed Governor Jonah Jang of Plateau State for the post of chairman of the governors’ group. Mr. Jang’s defeat rattled the president, several sources told SaharaReporters yesterday.

“Mr. President was up very, very late. But he had been up that late at night and still woke up in time to honor his appointments,” the source said. “But today, he did not seem to realize that addressing the assembly was an important obligation.”

Our two main sources said they and other Nigerian diplomats were shocked and embarrassed when Mr. Jonathan’s name was called to give his speech but the Nigerian head of state was nowhere to be found. “The official summit announcer called Mr. President a few more times, and then the program went ahead to another speaker,” said one source.

Mr. Jonathan later showed up to join in the photo-op session at the meeting and disappeared shortly afterwards without offering any explanation for his absence when it was his turn to speak.

Among those at the AU’s assembly were President Robert Mugabe of Zimbabwe as well as former President Olusegun Obasanjo.