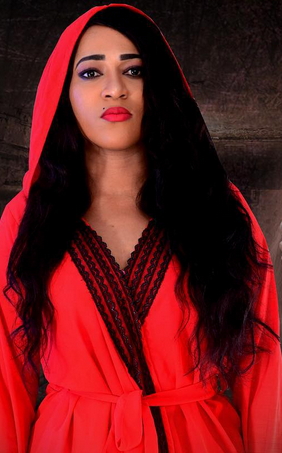 Nollywood actress, Rukky Sanda is not a new name in the Nigerian movie industry. To her credit are several hit movies since her debut in 2004.

Only last weekend, she capped it all up with the premiere of her latest production, Dark, which witnessed the presence of the who-is-who in the Nigerian movie industry.

The actress who looked very sultry at the event says that her journey into moviedom has been amazing so far, especially considering the learning process she has had to go through.

The CEO of the production house, Rukky Sanda Studio says that she has a recipe for keeping fit and it does not include any hard work. “I don’t know; I just try to be myself and try to be healthy, I think that’s the most important thing,” she said when asked about her beauty routine.

She also has an interesting story to tell. Not a foodie herself, she says, it came as both a surprise and a relief when two weeks ago, her house help stole her money and ran away.

“He cleaned my room a day before and I didn’t see him again in the morning. He ran away. He told me he wanted to go, that his father told him to come home like five days before he ran. I’m glad he left because I don’t eat as much anymore, the boy knew how to do everything and it was annoying because before I finish one he is bringing another and I don’t even go out I was eating like a glutton so I’m glad he left,” she recounts. [The Nation]