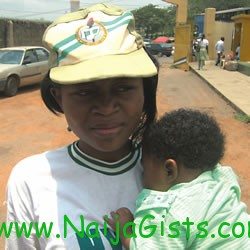 While disclosing this at the orientation camp, Iseyin on Thursday during the swearing-in ceremony of 2,606 corps members, Coordinator of NYSC Sekinat Idowu said mother and child were doing well in the hospital.

She identified the corps member, who gave birth to a baby girl, as Rhoda Idayat Iliya, an HND graduate of the College of  Health Technology, Jos, Plateau.

Idowu said the total population of corps members was made up 1,307 males and 1,299 females as at midnight on Wednesday.

“Your call to service among others is a call to join the vanguard to fight against poverty, corruption, ignorance and low-level technological development.

“You are also to crusade against the monster ravaging our world today called HIV and AIDS,” she told the corps members.

Idowu also commended  the state government for the proactive measures taken so far toward  the completion of  the NYSC permanent orientation camp on Okeho road in Iseyin.

“It is our belief that God will give the state government the means to complete the project, as promised early next year,” she said.

Idowu further thanked the Iseyin Local Government authorities for the construction of a borehole and  for the distribution of water to strategic points on the camp.

In his speech at the occasion, Governor Abiola Ajimobi urged the corps members to learn the basics of Yoruba language spoken in the state as they interacted with the people.

Ajimobi, who was represented by his deputy, Mr. Moses Adeyemi, also assured the management of the NYSC that no stone would be left unturned to ensure that the permanent orientation camp was completed in 2012.

“This is in line with the policy of the present administration in the state to fast track the infrastructure development of the state,” he said.

The oath of allegiance was administered on the corps members at the ceremony by the Chief Judge of the state, Mrs Badejoko Adeniji.(pm news)