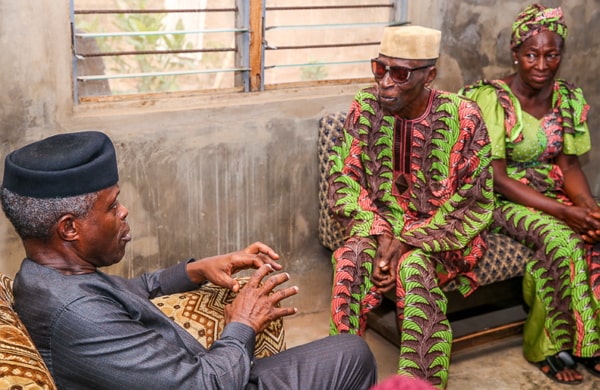 In this chat with The Nation Reporter, Rasaq Ibrahim, the official driver of late Obafemi Awolowo, Pa Olajide Olabode tells story of his life, his encounter with past Yoruba leaders and what he knew of the 1962 crisis in the Western Region.

I was born in 1932. I attended Emmanuel School, Ado Ekiti. After my elementary school in 1950, I couldn’t go further in education because of my parents’ financial constraint.

Would that mean that you were a brilliant pupil?

I was one of the best in the school, but, unfortunately, I didn’t get the opportunity to go further in my education. If my parents were financially strong, I could have gone to secondary school and university. So, I didn’t read more than Standard Six of those days. But I can tell you that it is equivalent to university of nowadays, because we had good teachers who taught us. They were dedicated and the pupils were ready to learn. In my time, there was nothing like internet, television etc which could have wasted our time. There was no light, but we used local lanterns to read. Despite the fact that we didn’t have access to all of these, we were still better off.

What informed your choice of career?

As a result of my parents’ inability to sponsor me further in my education, I decided to put in for driving training in Akure to avoid people mocking me. I drove the Principal of Ekiti Teacher Training College, Ikere Ekiti, Hon. J.E. Babatola for many years. Fortunately, when I went to Ibadan with Hon. J.E Babatola, the late Chief Olora of Ado Ekiti, recommended me for a government driver’s job. That was how I had the opportunity of joining the civil service in the premier’s office.

You had the opportunity of driving past Yoruba leaders including Chief Obafemi Awolowo, Chief Ladoke Akintola, Gen. Adeyinka Adebayo and visiting Heads of State….

I was the official driver attached to the premier’s office. When Chief Obafemi Awolowo was Premier of Western Region, I drove him. After he went to Lagos to become leader of the opposition, Akintola became Premier; so, I was driving Akintola until 1962 when there was crisis in the region. I was also doing special assignments. I was usually assigned to drive every African Head of State that visited. Usually, they came at different times.

What kind of relationship did you have with them?

I had a good relationship with them all. We interacted quite well, most especially Chief Awolowo. My relationship with Awolowo was cordial. He liked someone who could drive very well. He was a straightforward person. He was punctual at work. He didn’t like lateness. He didn’t use African time. And he was a man of honour, integrity, dignity and vision. He was very energetic, sensible and very intelligent. Awolowo was a distinct personality whose penchant for welfarism endeared him to many.

As his official driver, did he keep any secrets with you?

Awolowo had no secrets other than holding meetings in public to tell people the policies of the government. And even if he had any secret, he wouldn’t discuss it with me because I was driving him as an official. He was a politician. He went to the field for campaigns and held political meetings with elders of his party. Of course, when they held meetings, I wouldn’t be there because I was not a politician but a civil servant.

Can recall the Western Region crisis of 1962? What role did you play?

Awolowo and Akintola were very friendly right from the beginning. Awolowo was the leader of Action Group (AG) while Akintola was the deputy. In 1962, there was a conference of the AG in Jos. The duo went there with all party leaders across the regions. Akintola was then the premier while Awolowo had gone to Federal as leader of the opposition. I was the one driving Akintola, so I drove him and his wife to the airport on their way to Jos. Then, I came back home to park the car. Suddenly, three days after, he came back by train while the conference was still on. My Head of Service said, “Jide go and take official car and meet the premier, he will be arriving at the railway station anytime soon. I went to the station and picked him on his arrival. I greeted him and he replied. I asked him what happened because we heard on the radio that there was crisis at the conference. Akintola said, “Awolowo wanted to know so much about many things he wasn’t supposed to know.

He doesn’t know the premiership is quite different from the party.” That’s the much I know. I don’t know what happened between them but unfortunately things didn’t go well after that. That was the beginning of the crisis in the Western Region. Akintola was expelled by Awolowo from both the party and the government. Awolowo appointed Alh. Dauda Adegbenro to be the premier instead. Immediately, it was announced on the radio, the head of service instructed me to report to the new premier. I was with him in Osogbo where he was restricted to. It was on that ground that the Federal Government declared a state of emergency when there was trouble in the region. Majekodunmi was appointed as administrator to take charge. I was still in Osogbo when the administrator assumed office. I didn’t go to Ibadan because I was a civil servant. And once instruction is given to a civil servant, you know it must be followed strictly. It was about two weeks that Majekodunmi sent his ADC, late Muritala Muhammed to bring me. When he came, he asked, “Who is Olabode?” I said, “I am Olabode.” He said, “Don’t you know administrator has been appointed in Ibadan?” And I told him that “You are a military man, so, you cannot give me instruction because I am not a military man. I can’t follow you to Ibadan because I am with the Premier.” He said: “The Premier has been restricted and the administrator is going to use the official car and driver attached to it.” I said: “Where is the note given to you from my boss?” He gave me the letter written by the Head of Service which read “Jide follow this military man to Ibadan with the car. Report to Adengbenro that an administrator has been appointed. So, come along with him.” When I read the letter, I went to tell Adengbenro that I had been asked to report in Ibadan because an administrator had been appointed. Adengbenro bade me farewell and gave me money. Then, I left for Ibadan. I drove Majekodunmi for six months.

When did you retire from the civil service?

I retired voluntarily in 1977. I wouldn’t have retired but a company invited me to Hamburg, Western Germany as a transport manager for a brewery. They wanted to establish a brewery in Akure. When I returned, the brewery couldn’t take place. I was also invited by an insurance company, Nigerian Reliance Insurance Company in Lagos to work as a claim inspector. I was there for 30 months before I finally relocated to Ado Ekiti to rest.

How have you coped in retirement?

Life has been miserable for me and my family. I don’t have money to cater for our numerous needs. We have no bed to sleep on, no fridge, no television. I and my wife are sleeping on a mat while my children sleep on the tattered chairs in the sitting room. I am an old man and an old man cannot do much. I need money to eat good food and live in a convenient house where I would enjoy maximum comfort of life.

Vice President Yemi Osinbajo visiting you was such a big surprise. What special things have you done that attracted the visit?

This is an act of God. What is worth doing at all is worth doing very well. It may be that I performed very well during my service years. When I was in service, I was posted to several offices and seconded to a place where there was disagreement in public corporation, like Sketch Publishing Company. They sent me there to reorganise and reposition it and during the reorganisation, I performed very well. I was never found in any circle of corruption because I didn’t want to destroy my hard-earned integrity for peanuts. In 1999, the first elected governor of Ekiti State, Otunba Adeniyi Adebayo honoured me with an award. I was given Award of Worker of the Millennium in the state. Also, in 2012, Governor Fayemi gave me Award of Excellence. I didn’t procure it but it was hard-earned in recognition of my meritorious selfless service.

How would you describe the VP’s visit?

Osinbajo’s visit to my house remains a watershed in the history of my life. I feel excited and extremely happy. Everybody in my family appreciated the historic visit to my house. My wife, children and everybody around me were elated. As I am talking to you, I am still excited. I have gone on air to thank Governor Fayemi who brought Prof. Osinbajo to my house. I enjoyed the visit and it was very unique.

What made it unique?

It was unique because I didn’t expect that such a man at the top echelon of government could visit me. Who am I? A poor man like me. So, it was a great honour done me. I thank God for it. I give glory to Almighty God. I am full of joy because the VP has promised to give job to my unemployed children and solve my problems.

How did you meet your Wife?

I met my lovely wife when we were young. She loved me and I also loved her. Then we decided to get married.

We were blessed with 14 children but, unfortunately, three died some years back. I now have four women who are married and seven boys.

What kind of work do they do?

Two of them are into menial jobs, but that is not satisfactory, considering their level of education. Others are still unemployed – not because they don’t have good results but because there are no jobs. They still depend on me to eat, and this has become a great burden for me.