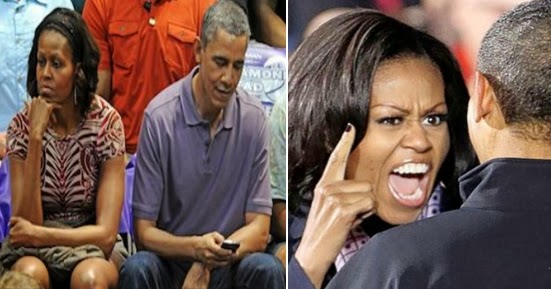 If the story making round is anything to go by, then America’s First family is set to break apart any moment from now.

The 21-year-old solid marital union between President Barack Obama and his 50-year-old wife, Michelle is likely to end when he finishes his tenure.

The National Enquirer in its latest issue titled ‘Obama Divorce Bombshell‘ reported that the marital relationship between the couple have been plagued with messy fight for several weeks.

There have been rumours swirling around Washington that the marriage of the American first Couple has been racked by screaming rows, allegations of infidelity and a string of jealous fights.

But the White House has refused to comment on the reports, says Mail Online, which quotes the National Enquirer as reporting that the Obamas have been at loggerheads since last summer and are now sleeping in separate bedrooms.

Mail Online reported that Mrs Michelle Obama is only hanging around until her 52-year-old hubby finishes his presidency.

The report disclosed that President Obama will return to Hawaii, his home state while his wife and their daughters will stay back in Washington.

What they are going through is typical of every marriage. Time will tell how long they can tolerate each other.