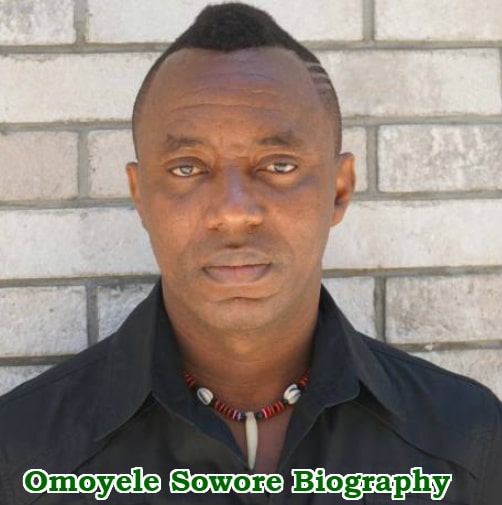 The 2019 general elections is just around the corner, with less than 100 days to go. The polity is heating up in anticipation of either a change or a continuation of government. One of the underdogs in the upcoming presidential contest is a renown activist, who is seeking to ride on the platform of youth movement; his name is Omoyele Sowore. We bring you everything you need to know about the youngest candidate in the race to become the ‘number one citizen’ of the most populous nation on earth.

Omoyele Sowore was born on February 16, 1971. He was born into a large polygamous family in a remote town, where he grew up in the midst of his fifteen siblings. While growing up, he was a subsistence fisherman, who combines his education with fishing, in a bid to help put food on his large family’s table.

He made his way to Lagos shortly after his secondary education. He had his eyes set on using the media, as a pro-democracy tool and became actively involved in anti-government protests as an 18-year old student.

Sowore became popular in 1992, while he was in school. He led a massive student protest against the military government of General Ibrahim Babangida. The protest resulted in a fatal confrontation with the Nigerian Police, resulting in the death of seven students. Sowore, the leader of the protesting group, was captured and severely tortured by the Police.

Sowore was also part of the famous June 12, 1993 protest, against the General Babangida led military government, for its annulment of the Presidential elections, which was to usher in a democratic government of late MKO Abiola.

He suffered a cult attack in 1999, when he was severely injured. He left the shores of Nigeria for the United States shortly after the attack. While in the US, he founded the now prominent online news platform,  Sahara Reporters, in 2006. Sahara Reporters rose to prominence in December 2009, when it became the first media platform to discover and publish the identity of Nigerian Al Qaeda suicide bomber, Abdulmutallab Faruk Umar (Underwear Bomber), who attempted to detonate a bomb aboard a flight. Today, Sahara Reporters is one of the most credible globally-recognised African news agencies.

Earlier this year, on 25th February, 2018, the 47-year old reporter announced his political intentions to run for the Presidential position in the 2019 general elections. He created a political slogan, which he tagged #Takeitback movement.

The 47-year old Presidential aspirant announced his political intentions as a party-less individual. However, only few months ago, in August, he created his own political platform, which he named African Action Congress, simply known as AAC. The political party is duly registered with INEC.

AAC conducted its maiden national convention about a week ago, on 6th October, 2018. Omoyele Sowore, expectedly, emerged as the party’s presidential candidate for the forthcoming general election, come February 2019. He was elected unopposed during the AAC primary elections.

African Action Congress and its Presidential Candidate’s ambition is being funded by a movement, which solicits donations from capable youths, concerned groups and stakeholders in Nigeria. The movement aims to raise a minimum of $2 million, to help fund AAC and Sowore’s Presidential campaign.

Omoyele is a well learned individual. His scope of knowledge cuts across several disciplines. Today, he is a lecturer, a reporter, a blogger, a writer and more significantly, an human rights activist. His wide range of profession stems from his diverse educational background and qualifications. Currently, he lectures at two prominent educational institutions in New York; School of Visual Arts and City University of New York.

Although, not much is known about the Presidential aspirant’s early education, he reportedly had his primary and secondary education in his native town. He later moved to Lagos for his tertiary education.

He studied Geography and Planning at the University of Lagos between 1989 and 1995. Although, his course of study was only a four-year course, he spent six years in school. He was suspended twice from school, because of his political involvements and anti-management practices, during his tenure as President of the University of Lagos’s Student Union Government (SUG). He eventually obtained his Bachelors degree in 1995.

In his first year at the University of Lagos, he was involved in a massive protest against the Nigerian Government’s plan to cut down the number of Government funded Universities by 23, from 28 to 5. He became fully involved in activism in 1992, when he was elected as President of Students Union Government in Unilag. As the union head, he led several crackdowns on cultists in Unilag. His aim was to purge Unilag of cultism. Aside from school politics, Sowore was heavily involved in core activism, against the Nigerian government.

Four years after his graduation from the University of Lagos, Omoyele travelled to the United States to further his studies. He attended the Columbia University, where he obtained his masters degree in Public Administration.

Sahara Reporters has been blighted by controversies over the course of its existence. In the last general elections, it was widely seen as a media tool of the All Progressive Congress (APC) in developing and disseminating propaganda against the then ruling party, PDP.

In the safety and convenience of Sowore’s work station, Sahara Reporters headquarters, located far away in New York City, United States; he is able to dish out highly controversial news pieces to the Nigerian populace. His investigative reports greatly worked against the government of Goodluck Ebele Jobathan (GCFR). Sahara Reporters is, without doubt, one of the key contributors in the last general elections.

Sowore was involved in many controversial cases, as his online media platform, Sahara Reporters, at a time, became the major source of some incriminating reports against certain elements in Goodluck Jonathan’s government. He was accused of being a blackmailer, who uses his media platform to blackmail and extort money from powerful politicians.

One of his controversial reports, which seriously heated the polity, was his report, which alleged that, Senator Dino Melaye, representing Kogi West, did not graduate from Ahmadu Bello University (ABU), Zaria as believed. This report created serious tensions in the Nigerian political space. In fact, the Vice Chancellor of A.B.U was summoned to the senate, to clarify the situation, which he did in affirmative, that Senator Dino Melaye did graduate from Ahmadu Bello University, Zaria.

Omoyele is a Yoruba man, who hails from Ondo State, the only oil-producing state in the South Western region of Nigeria. His hometown in Ondo state has been identified as the town of Ilaje, where he was born and raised.

The controverstial reporter is reportedly married and his marriage is blessed with beautiful kids. His wife and kids are based in the United States. Sowore has, so far, chosen to exclude his wife and children from his presidential campaign.  He is making every effort to ensure his family is not included in his controversial/activist life and its kickback effects.

There is no accurate parameter to evaluate the wealth of the 47-year old presidential aspirant, as most of his assets are stocked in the US. However, his online media platform, Sahara Reporters, has been estimated to be worth in the region of 3.5 billion naira ($10 million).

Sahara Reporters, is reportedly funded by a group of multinational foundations, who pump significant amount of money into the platform, to assist it in its quest of investigative journalism.

The journey started earlier this year, on 25th February, 2018, when the Sahara Reporters owner announced his presidential ambition. He created a movement which is now gaining steam. During one of his media addresses, he described his major opponents; President Muhammadu Buhari as useless, and Alhaji Atiku Abubakar as corrupt.

His campaign, so far, has been filled with thrills and grills. He has been praised, abused, cursed and even beaten up. One noteworthy incident, was his unsolicited visit to the Ooni of Ife, Oba Ogunwusi, some time last month. He and his cohorts were reportedly beaten up by the palace guards, before the Ooni eventually intervened. This is one among many of such incidents.

Weighing Sowore’s chances against heavyweights like President Buhari and former Vice President Atiku; he is highly unlikely to garner as much votes as these prominent figures. To make matters worse, his political party, AAC, has physical presence only in Lagos and few other states. In fact, he is only popular on social media, as only few people know him in person.

Some people have argued that, Sowore’s underlying intention, in contesting for next year’s presidential election, is simply to create awareness for himself, so as to gain future favours. Other groups of people simply call him a joker and scammer, who is only using his campaign movement to solicit donations for his selfish interests. Whatever his intentions, his chances in the forthcoming election look very slim. However, regardless of his chances, we wish him the best in his quest.