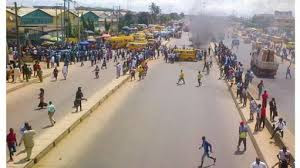 Many people now live in fear as suspected cultists clashed with OPC in Ogijo area of Ikorodu yesterday. At least 3 people were killed by stray bullet at Ile-Oba bus stop before ogijo police station. Among those killed was a petty trader who sells at the Ile-Oba bus stop and two other unidentified middle aged men. All the shops remain closed and residents remain indoors as at the time of this report.

The popular market called Oja by iya na school has been deserted. The police should please come and restore peace in the area. Throughout the night there was shooting in molatori area very close to Bale’s house in Ogijo.

[Reported by a fan living in the area]

Photo: Hnaub University Drop Out Steals Sponsor’s Car For Ejecting Him Out Of House
44 Cultists Expelled From LASU, 25 Others Suspended For Cheating During Examination