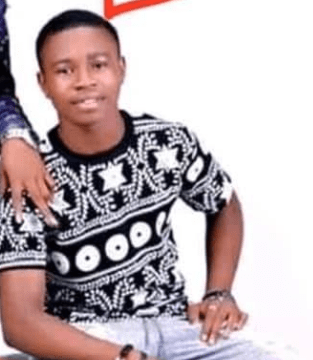 Heartbreaking Story Of Orphaned Seminarian Killed By Kidnappers In Kaduna

Emotions were high last Tuesday as the remains of the 19-year old seminarian, Michael Nnadi, murdered by a band of heartless kidnappers was committed to mother earth at the Good Shepherd Seminary, Kaduna.

It was an emotion-laden occasion as Catholic priests, seminarians, the Catholic faithful and people from all works of life converged at Kakau in the Chikun Local Government Area of Kaduna State to pay their last respect to the poor lad mowed down in his prime by people who have sworn that this country will know no peace. Michael had no offence other than pursuing his priestly carrier in that part of the country of his choice. He was among the four senior seminarians abducted by marauding kidnappers who stormed the major seminary at about 11pm on January 8, this year.

After ransacking the seminary, the heavily armed invaders escaped with some of the students. A check by the authorities of the institution in conjunction with the police was to reveal that four of them had gone missing. Their abductors were later to make contacts with the families of their victims demanding huge sums of money as ransom.

Days and weeks passed by as negotiations went on with the criminals regularly threatening to snuff life out of the young men if they failed to do their bidding. Such was the fate of Michael and his colleagues. From indications received, some ransom was eventually paid to the marauders possibly through contributions by families and sympathizers with the hope that the bandits will have a change of heart. But that failed to happen.

However, after about three weeks of their abduction, the registrar of the seminary, Rev. Fr. Joel Usman was to announce the release of three of the seminarians while declaring one still missing. But less than 24 hours after, Fr. Usman announced that the missing student had been found dead. He gave his name as Michael Nnadi.

The announcement brought to a sad end three weeks of trauma, agony, pain and winding negotiations with the abductors who had severally threatened to kill the innocent seminarians if enough ransom was not forthcoming to secure their release. But it did not end without consuming a casualty in the person of Michael.

Why Michael became the only victim, the motive and circumstance of his killing remains a matter of guesswork. But his case turned out very pathetic given emerging information about him and his family background. According to the narrative, Michael was an orphan; having lost both parents some years back. Since then, their aged grandmother had been responsible for his upkeep and that of his four other siblings in Sokoto State where they lived. It therefore remained to be conjectured where the poor old woman would have sourced the humongous amount of money abductors usually demand during such negotiations.

Even then, it is being feared that the killing of Michael may be on account of his poor family background which his abductors would have come to terms with as they interviewed him. It could also be on account of some other mundane considerations or to teach the Catholic Church some lesson as some other account had it. This fear is further reinforced by the Catholic Bishop of Sokoto, His Grace Matthew Hassan Kukah when he alluded to the “torments of the brutal, harsh and senseless haranguing of the kidnappers who are totally empty of any show of human emotions”.

The kidnappers had called the poor old woman three days before Michael’s death became public to even inform her that her grandson had been killed. But those privy to that information thought it was one of those usual pranks to force relations to part with more money. But they were wrong as events were later to prove. This goes to suggest that they may not have been happy with the woman over the ransom paid on the head of Michael. So, they had to make good their evil threat to show that they meant business irrespective of the conditions of the poor woman. That shows how callous and demented those kidnappers really are. Very sad indeed!

The irony of Michael’s background equally played out very succinctly in the discussions, Bishop Kukah had with Mario Lozano, a staff of the Aid to the Church in Need, an organization dedicated to the cause of the persecution of Christians around the world. She had sent an emotional voice message to the Bishop to say she heard that Michael was an orphan and that since the kidnappers would be looking for money might his life be in danger if they realize that he is an orphan?

By a twist of fate, the fears expressed by Lozano about the safety of Michael turned out a reality. That heightens the theory that Michael may have lost his life for the inability of his grandmother to raise the amount of money demanded as ransom by the kidnappers. There could be some other motives for his killing as the intelligence of the criminals should not be taken for granted. The poverty angle could be a convenient subterfuge for a larger agenda. So why not kill Michael and make it look as his death was due to his inability to afford the ransom? Nobody should rule out the possibility of terrorists masquerading as mere kidnappers.

This dimension is further given ample credence by the fact that those who raided the seminary and abducted the four seminarians knew quite well that priests are trained there. They also knew that it is a religious institution for the preparation of would-be priests. Ordinarily, such a place should not be a fertile ground for high profile prospective kidnap victims. Not at all! But the fact that the kidnappers still considered it a target and showed no emotions or sympathy when the reality of the abducted victims dawned on them goes to suggest that they were clear in their devilish mission.

One would have expected that the circumstance of Michael and the discussions they had with his grandmother would have touched them to save him of any mortal harm. But that would not be. There is definitely more to it than ordinarily meets the eyes. From available accounts regarding the number of victims in their cell and the manner they conducted their affairs, there is everything to suggest that there exists a cell of Boko Haram terrorists somewhere in the bushes of Kaduna State.

This reality cannot be ruled out. Those who summed up the courage to invade a seminary must have had an agenda similar to that of the insurgents irrespective of the fact that three of the seminarians eventually regained their freedom. There is nothing to suggest they will not attack the school again or similar institutions unless serious security measures are woven around their premises. But do our security agencies possess the capacity to protect the citizenry? Michael’s fate, his fellow victims in the kidnapper’s cell and elsewhere offer clear indications as to the direction of the answer.

One can then understand the frustrations of Bishop Kukah when he said Nigeria does not possess that set of goals or values for which any sane citizen is prepared to die. That is the unfortunate situation in which we live today even as some of our leaders still live in self-denial of that foreboding reality. A situation where innocent citizens are regularly cut down in their prime by all manner of marauders with the government seemingly helpless has all the trappings of a failed state.

Tope Alabi On Upcoming Christian Movie “I Got The Inspiration From God”
P-Square Reunion 2020: Will P-Square Brothers Peter & Paul Okoye Ever Come Back Together