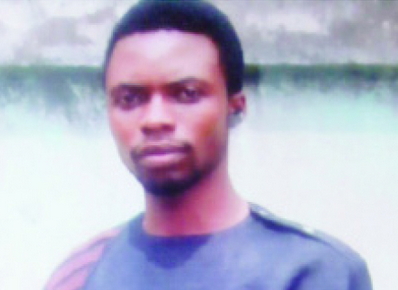 Anger. Rage. Tension. These are the sentiments that currently pervade Owaelu Uratta, a community in Owerri North Local Government area, as well as Umueze Uzoagba in Ikeduru Local Government area, both of Imo State, following the gruesome murder of a 26-year-old man, Okechuku Izuchukwu Iwuchukwu. He allegedly died in the hands of some men of the Nigeria Security and Civil Defence Corps (NSCDC) in Orji.

Okey, as he was fondly called, was the only child of his parents – Mr. and Mrs. Sunday Iwuchukwu. They hail from Umueze Uzoagba but reside in Owaelu Uratta. The deceased was a tricycle (keke napep) operator before his demise.

The young man’s wife, Mrs. Obianuju Iwuchukwu, is expecting the couple’s first child. Traditional ruler of the community and the Acting Commandant General, Imo State Peace Advocate Corps, Hon. Peter C. Ohagwa who were sent by the state governor, Chief Rochas Okorocha, were in the town to plead with the people to maintain peace. Their pleas calmed the people of the community and averted a reprisal.

According to eyewitnesses, Okechukwu, who recently returned from Pakistan where he went in search of greener pastures before going into the keke transport business, was allegedly returning from work when he sighted some group of people lying down, and he thought some robbers were operating in the area. He turned round to escape, but two officers of the NSCDC who were operating an illegal checkpoint in the area reportedly opened fire on him, killing him instantly.

In a petition sent to the Imo State Police Commissioner through their lawyer, Mr. Williams N. Opara of Osuoha, Opara & Co., Ahuruole-Florence Chambers, Owerri, the family expressed shock that the killers of its only child branded the deceased an armed robber who had a shoot-out with them.

The petition partly reads: “It is our brief that our client’s only child was gruesomely murdered by Inspector Ekere Harrison Ifeanyi and Sergeant Ojoko Paul, who are men of the Nigerian Security and Civil Defence Corps attached to its headquarters in Owerri on Saturday, the 25th day of July, 2015 at about 11.00pm when he was riding home on his way back from work at Old ELF Petrol Station situate along Umundula, Owaelu, Owalla Road, Off Orji Junction.

“Sir, it is our further briefing that it took these men of the Civil Defence Corps a period of five hours between 11.00pm to 4.00am to lodge a false report of a shoot-out with “armed robbers” at the Divisional Police Station, Orji which is a distance of less than one kilometre from the scene of the incident. And within the period, we are briefed, these men from the Civil Defence Corps were able to get an old and unused gun, one expended bullet and one live bullet which they planted on the body of our client’s son in order to brand him as “an armed robber” in order to justify their cruel and extra judicial killing of our client’s son.

“Sir, it is our brief that there was no report of any robbery and or armed robbery incident in the neighbourhood and or vicinity on the day our client’s son was killed. It is also our briefing that people were still carrying on with their various businesses around the scene and around the junction area.”

The petition stressed that the victim once rode a keke on hire purchase basis for somebody, which he eventually inherited and sold to a Civil Defence officer before the one in which he was killed was bought for him by his father.

The family called on the state police boss to use his good offices to cause the circumstances leading to the death of their son to be investigated and to bring the culprits to book.

One of the natives of Owaelu, who pleaded anonymity, told Daily Sun that the murder of Okechukwu was a big blow to the community, and that the traditional ruler even cried for the young man and his family.

He said: “Okey is such a quiet boy who is loved by all. In fact, this is darkness for this family. Most annoying is branding this boy an armed robber, but they have failed in that because it happened where people were. It took these officers four hours to report the matter at the Orji police station. They used this period of interlude to organise an obsolete locally made gun and claimed they found it in his keke. When it became clear to them that the incident took place near living homes and that people saw what happened, they went to Governor Rochas Okorocha to intervene and plead with the family.

“In fact, it was when the senior police officer saw the gun that he got angry and sent his men to go and arrest the guys, and we are happy that they have been arrested and detained. So we plead with the President, Attorney General of the Federation, Imo State Governor, Imo State Chief Judge, Commissioner for Justice and all the authorities concerned to give us justice. His father has been down with stroke and his pregnant wife can no longer cope as he is the only son and the bread winner of the family.”

Father of the deceased, who is in his late 60s told the reporter: “I am finished. My son is very responsible and does not look for problem. He hardly talks. He had before now travelled to Pakistan for greener pastures but it did not work out and he returned home. And instead of staying idle before any other trip could be arranged for him, he began this keke thing. You can see I have been down with stroke and he is the one taking care of all of us.

“The first keke he used was on hire purchase. He completed the money and it became his. But when the engine started to gulp oil, he dropped it and I bought him this one. He then sold that one to a Civil Defence officer and he has not even paid him for it.

“That night we were waiting for him to return. When the time passed, we called his number severally and it was not going. We all became worried and in the morning somebody called his wife and told him to come to the police station, that she should come with one of our brothers who they said was the last person he called. When they got to the police and seeing the condition of the wife, they asked them to go, pretending he was in the cell. They later called the man out and told him that he was in the hospital.

“When the young man came back and reported the matter, he went with some people to see him in the hospital as the police did not tell them he was dead. They went with the police to Aladinma Hospital and they moved round the whole ward and could not see him. After a long time, they now asked the nurses and it was the nurses that led them to the mortuary where they deposited him. He was brought there dead and taken straight to the mortuary.

“Why would people be this wicked? What shall I do now? I want the government to bring those that killed my son to book. I want justice for my son. This is too much for us to bear. Look at his pregnant wife. Why? Why?”

However, when contacted, the State Police Public Relations Officer, Mr. Andrew Enwerem, a deputy superintendent of the police (DSP) said the command got a report from the NSCDC of an encounter their officers had with armed robbers who engaged them in a shoot-out. They said in the process, one of the robbers was gunned down.

Enwerem, who said he did not even know the name of the deceased, however said the NSCDC, as a security agency, would be in the best position to give details of what happened.

When asked about the alleged arrest of the NSCDC men, he said: “I am not investigating. If there is any arrest made, I have not been informed.”

Also speaking, Hon. Ohagwa of the State Peace Advocate Corps, told the reporter: “You know our Governor Rochas Okorocha, anything that touches the people touches him. So when he got the report of this incident, he sent us to console the people and appeal to them to be calm. By God’s grace, we have stopped them from engaging in a reprisal. I know that the government will see that the matter is handled the way justice would be seen to have been done.”