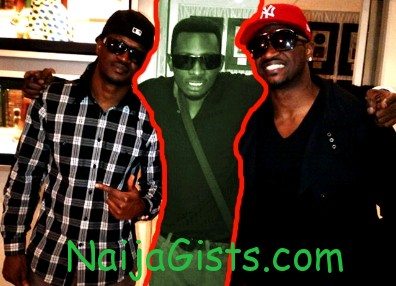 Talented Nigerian singer and rapper Akinmayokun Awodunmila aka May D who was paid for a performance at the recently concluded Calabar Carnival in Cross river state has been blocked by the biggest guys in the music industry, P-Square. naijagists.com

According to people in the know, the organizers of Africa’s biggest street party paid May D to perform alongside Akon and P-Square not knowing that the stars have dropped May D from their official record label, Square records.

Last year, May D was dropped from Square records over what they termed “irreconcilable differences”. Read details here

Ok back to the gist, hoping to perform on the same stage with P-Square, Mr May D arrived Calabar airport on the same airline with Peter and Paul Okoye of P-Square.

When the show started, J-Martin was used in place of May D without formally informing him.

How Did May-D Got To Know.

We learnt he put a call true to the event organizers who confirmed he has been blocked from performing that night.

We also gathered that before replacing May D with J-Martins, P-Square informed the event organizers that May D has been dropped from their record labels so they didn’t pay him his balance as contracted.

The above measure forced May D to formally pull out of the show.

To cut the long story short, May-D’s part in the popular Chop My Money music was cut off while P-Square plays alongside Akon.