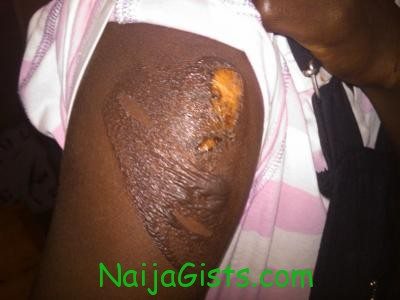 Pastor Chukwudi Ibe of Divine Power Ministry in Onitsha has been arrested for allegedly inflicting injury on an 11-year-old boy in his custody.

Ibe used a hot electric iron to inflict severe burns on his ward, whose name was given as Friday, after he accused the boy of stealing N200 and keeping bad company. naijagists.com

According to the neighbour who alerted the police, Ibe and his wife always maltreated their ward, adding that Friday was most times chained and locked up inside the house pending when the couple would return from work.

He said the boy was not allowed to go to school and was forced to do all sort of tedious jobs, including those a child of his age is not expected to do.

Ibe confessed that he burnt the victim with hot iron but claimed it was a disciplinary measure intended to make him desist from stealing. www,naijagists.com

“I had to burn him with hot iron so that he will see the mark on his body and stop stealing,” he insisted.

Ibe also said that his wife, who is the victim’s aunt, usually chained him to prevent him from going out, adding that each time he was not chained, he always stayed out late into the night.

His wife however claimed she didn’t know her husband was burning the child with hot iron.

An officer from the Central Police Station, Onitsha, who requested anonymity, said they got a distress call from a concerned citizen, saying, a man wants to kill his ward.

He said they responded quickly and arrested the suspect and his wife.

The Divisional Police Officer, Central Police Station, Yusuf Abdul, when contacted said he was yet to be officially briefed about the case. naijagists.com